2021 3M Open live coverage: How to watch Thursday’s first round 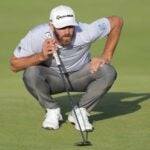 Dustin Johnson heads into the 3M Open ranked No. 2 in the world.

The Open Championship is in the rearview, and the Olympics arrive next week, but Thursday marks the start of the 2021 3M Open in Minnesota. Here’s what you need to know to watch the first-round action on TV or online.

Dustin Johnson had a good run at the 2021 Open, firing a 67 on Sunday to finish T8 at seven under. It was DJ’s best major finish since his Masters victory, but it still came at a cost. Jon Rahm finished T3 and overtook the World No. 1 ranking. But Rahm is taking the week off, so Johnson has the perfect opportunity to reclaim the top spot at the 3M Open.

Johnson will get his tournament started at 8:23 a.m. ET on Thursday. He’ll play the first two rounds alongside fellow major champions Louis Oosthuizen and Bubba Watson.

Below you will find everything you need to watch the first round on Thursday.

How to watch 3M Open Round 1 on TV

How to stream 3M Open Round 1 online

You can stream the first round Golf Channel TV coverage of the 2021 3M Open on golfchannel.com. Fans can also view Featured Group coverage of the opening round all day Thursday via PGA Tour Live with a subscription.