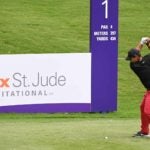 Patrick Reed tees off during Round 1 of the 2020 WGC-FedEx St. Jude Invitational.

The first round of the PGA Tour’s 2020 WGC-FedEx St. Jude Invitational in Memphis is in the books, and Friday’s Round 2 tee times have been moved up in anticipation of inclement weather in the afternoon. You can find full updated second round tee times at the bottom of this post.

Notable groupings for Round 2 of WGC-FedEx St. Jude

Now that defending champion Brooks Kopeka has re-asserted his relevance with a sizzling opening round of 62 (8-under), all eyes will be on him on Friday to see if he can back it up with another low round. Kopeka is grouped with rising star Viktor Hovland and Patrick Reed. The trio tees off at 8:40 a.m. ET off of No. 10.

Another player to look out for: Rickie Fowler, whose first-round of 64 launched him into a tie for second with Brendon Todd, two strokes behind Koepka’s lead. Fowler will play alongside Bryson DeChambeau and Jon Rahm at 9:40 a.m. ET off of No. 1.

Check out the complete Round 2 tee times for the 2020 WGC-FedEx St. Jude Classic below.