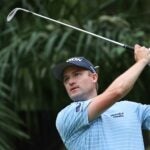 The 2020 Mayakoba Golf Classic presented by UNIFIN — the final PGA Tour tournament of 2020 — continues on Friday, December 4, in Mexico. You can find full second round tee times for the tournament at the bottom of this post.

Hopes were high for World No. 3 Justin Thomas this week, whose worst finish in his last four starts is a T12 at the CJ Cup at Shadow Creek. But an opening 1-over 72 has him seven shots behind first-round leader Russell Knox, who is 6-under.

Thomas’ playing parters, Viktor Hovland and Joaquin Niemann, are right in the mix, though, after firing a 4-under 67 and 5-under 66, respectively. Hovland, Niemann and Thomas will play the second round together again, teeing off at 12:20 p.m. ET on Friday. Knox, who leads the field by one shot and his seeking his third career Tour victory, will play with Austin Cook and Nate Lashley at 8:00 a.m. ET on Friday.

Check out the full second round tee times for the 2020 Mayakoba Golf Classic below.