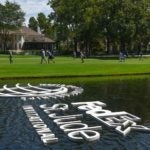 Players walk the 18th fairway during the second round of the WGC-FedEx St. Jude Invitational.

The third round of the 2020 WGC-FedEx St. Jude Invitational will be played Saturday, August 1, at TPC Southwind in Memphis, Tenn. You can find full third round tee times at the bottom of this post.

Notable tee times for Round 3 of the WGC-FedEx St. Jude Invitational

After signing for a sizzling opening round of 62 to lead the field by two shots, defending champion Brooks Kopeka cooled a bit on Friday, firing a 1-over 71, which dropped him into T3 heading into Saturday’s third round. Koepka will play in the penultimate grouping at 12:50 p.m. ET along with Chez Reavie and Sung Kang.

Kopeka now trails leader Brendon Todd by four shots. Todd is in the midst of the hottest season of his career, with two wins so far this season, as well as a solo fourth at the RSM Classic. After firing rounds of 64-65, he leads the field by two shots.

Right behind Todd is Rickie Fowler at 9-under overall. Fowler will play in the final grouping with Todd, along with Byeong Hun An, who is 7-under overall. The trio will begin the third round at 1:00 p.m. ET.

Check out the full third round tee times for the WGC-FedEx St. Jude Invitational below.

Refreshed and with a new outlook, Matt Wolff vaults into contention at the U.S. Open