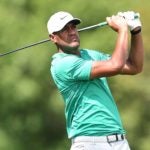 Tony Finau is only one shot behind the leaders at the 2020 3M Open halfway point.

The third round of the 2020 3M Open will be played Saturday, July 25, at TPC Twin Cities in Minnesota. You can find full third round tee times at the bottom of this post.

Notable tee times for Round 3 of the 3M Open

Tony Finau is the highest-profile player near the top of the leaderboard, and the 30-year-old continued his streak of consistent quality play with a second round of 66. Players will be grouped in threesomes and playing from both the first and tenth tees on Saturday.

Finau is 11 under par overall and trails tournament leaders Michael Thompson and Ricky Werenski by one shot. Finau will play in the final grouping on Saturday alongside Thompson and Werenski, and the trio will tee off at 1:00 p.m. ET.

Defending champion Matthew Wolff is also in the mix this weekend after firing rounds of 65-68. He’s nine under par overall and trails the leaders by three shots. Wolff will play the third round alongside Talor Gooch and Xinjun Zhang at 12:49 p.m. ET.

Check out the full third round tee times for the 3M Open below.