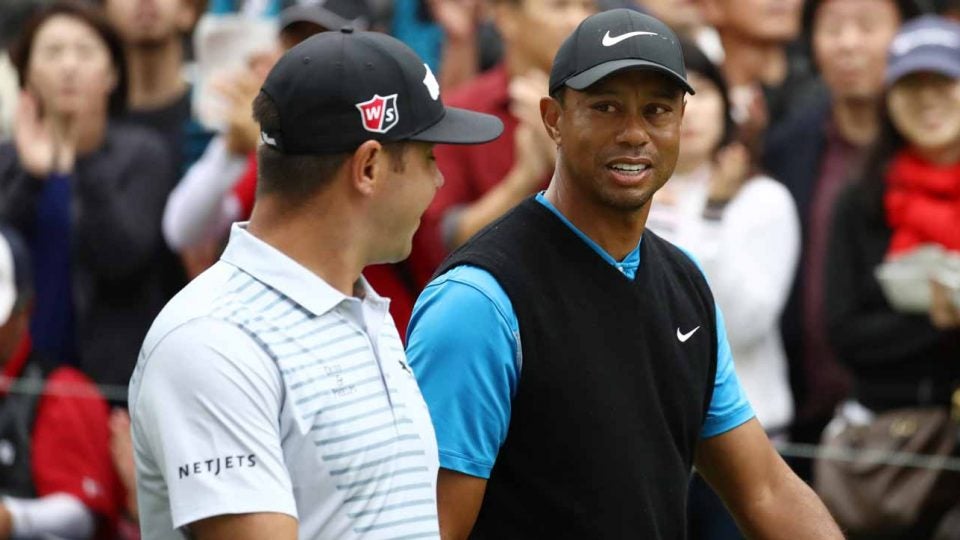 Gary Woodland got a chance to make his case in front of Tiger Woods at the Zozo Championship.
Getty Images

Presidents Cup hopeful Gary Woodland got a chance to audition for a captain’s pick in front of a very important audience this weekend at the Zozo Championship: Tiger Woods.

Woods was busy strengthening his own case for a captain’s pick, and he’s certain to be on the team now after winning the Zozo wire-to-wire. But he got to see plenty of Woodland’s game, too: weather dictated that Woods, Woodland and Keegan Bradley played the final 36 holes together. Woodland shared Woods’ first-round lead after a six-under 64 but fared two shots worse each round from there, posting 64-66-68-70 to finish solo 5th.

After his final round, he dished on the captain’s pick chatter he’d had with Woods on the course.

“We talked about it. We joked with each other that we both needed a pick so we’re out here trying to impress Tiger,” he said. “But I think Tiger’s got a good grasp on what he wants to do.”

Woodland’s obvious season highlight came from his U.S. Open victory at Pebble Beach, which powered him to 10th place in the final Presidents Cup standings. But he stalled out the remainder of the 2018-19 PGA Tour season, calling his captain’s pick status into question. But Woodland finished T3 at last week’s CJ Cup before the 5th place at Narashino Country Club, which brings him into the thick of the conversation.

“I kind of had a lull there after the U.S. Open, which was frustrating. But five weeks off, came back to Vegas [at the Shriners] and found some things in Vegas and it’s turned in some pretty good weeks the last couple weeks,” he said.

“I had a great year earlier in the year and I played well the last two weeks, so hopefully that’s enough. I’m kind of in La La Land from the standpoint where if you don’t make the team, you never know what happens, but I feel pretty good about my chances and I’m happy with where my game’s at.”

News
This or That: 15 questions with U.S. Open champ Gary Woodland

Woods didn’t comment on Woodland’s status, but joked after his round about trying to impress himself with his game. “I think the player definitely got the captain’s attention,” he said. Now the only question is which three players will join him on the U.S. team that heads to Melbourne in December.

Woodland was duly impressed with the front-row seat he got to his potential captain’s play.

“The ball-striking exhibition I’ve seen the last two days is a joke,” he said.

Woodland is skipping this week’s WGC-HSBC Champions, which means his Presidents Cup resume is complete. Now it’s time to wait and see what the captain decides.