Check in every week for the unfiltered opinions of our writers and editors as they break down the hottest topics in the sport, and join the conversation by tweeting us @golf_com. This Sunday we discuss Tiger Woods’ win at the Zozo Championship, which tied him with Sam Snead with 82 career PGA Tour victories.

1. Tiger Woods won the weather-delayed Zozo Championship on Monday in Japan, which aired in prime time in the States on Sunday night. Woods has now won three times in the last 13 months, which includes victories at the 2018 Tour Championship and the 2019 Masters. His Masters win gave him 15 majors, and now he’s tied with Sam Snead with 82 career PGA Tour victories. Which is more impressive, the 82 wins or 15 major titles?

Michael Bamberger, senior writer: Really interesting question. If you could only have one, you’d want the majors. He wins majors at the rate he wins non-majors. I guess the 82; SO many years with SO many massive numbers of titles. But 15 takes your breath away, too, maybe moreso. But 82 is like 800 home runs. You wouldn’t think it’s possible.

Josh Sens, contributor (@JoshSens): Both are astounding but Tiger’s reaction today was, I think, a pretty good indication of which he finds more impressive. He smiled and looked pleased. But this was no fist-pump and roar celebration. I wager that he’d trade a dozen or so Zozo Championships for another major or two.

Dylan Dethier, senior writer (@dylan_dethier): Sens is right. Yeah, the 82 is hugely significant — but this week felt strangely ordinary. Woods used to win PGA Tour events (and Euro events, too) at strange parts of the calendar, in far-off places. This felt like a return to that type of feeling, and a reminder that he’s certainly not dead yet.

Luke Kerr-Dineen, instruction editor (@LukeKerrDineen): The gold standard in golf is major championships. It always has been, always will be, and always should be. But yes, 82 wins is still incredible, and at a minimum, a testament to how well-rounded Tiger Woods’ dominance has been through the years.

Alan Bastable, executive editor (@alan_bastable): Both numbers are exhausting just to think about, but I think I give the edge to 82, mostly because of the consistency and longevity that number demands. Consider the career win totals of other Mt. Rushmore types who didn’t win even half or one-third of that total: Tom Watson: 39, Lee Trevino: 29, Johnny Miller: 25. Eighty-two is just silly.

2. It was just two months ago that Woods — who made his season debut at the Zozo — had his latest surgery, which came after a handful of rough starts. Given his health and playing drought, was this win more unexpected than his Masters victory?

Bamberger: No, not really, because so much can go wrong, or right, at Augusta. You can never really say a Masters win is expected. There are more great players at Augusta. It’s a MUCH bigger occasion. There’s much less margin for error. So, no, the Masters win was more unexpected. But not by much.

Sens: To borrow from Monty Python, Tiger’s recent knee issue was just a flesh wound, at least compared to other agonies he’s been through. The mountain he climbed to get back on top at Augusta was more remarkable by every measure in my book.

Kerr-Dineen: Nah, I don’t think so. The Masters is the Masters. It was a major, career-changing hurdle that impacted his legacy for the better. A win in Japan after a minor knee surgery, while impressive, doesn’t compare.

Bastable: Well, the question is…which one was more unexpected. Tiger was certainly playing better, more consistent golf in the run-up to Augusta than he was in the run-up to Chiba. So in that sense his inspired play at the Masters was easier to see coming. I had very low expectations for him at the Zozo — figured it was nothing more than a “reps” week. I was wrong. As usual.

Dethier: We shouldn’t shortchange just how unexpected this win was. People had begun to write him off again as recently as Monday — and he put together a dominant wire-to-wire victory over a strong Zozo field. But the Masters is a truly global event, and Woods has taught us to train our eye on majors. That will always give it the edge. 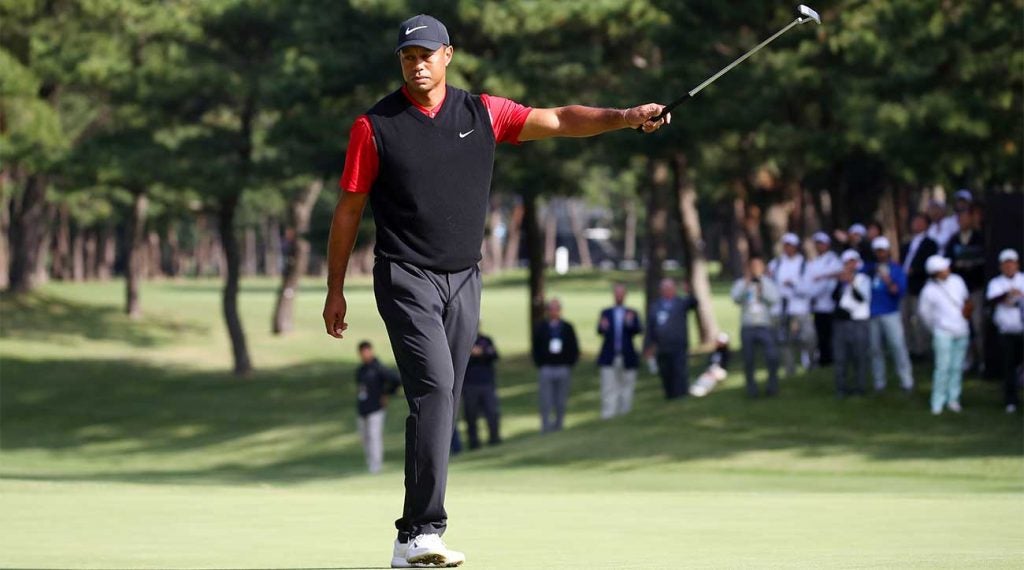 Tiger Woods raises his putter after winning the Zozo Championship on Monday in Japan.
Getty Images

3. Tiger has spent his whole career chasing 18 — was 82 an important number to him?

Bamberger: Eighty-two never captured the imagination, and still does not, because Snead’s win total changed so often over the years, so no.

Sens: It’s not insignificant. But if Tiger’s own subdued celebration today was any indication, 82 does not exactly top his list.

Kerr-Dineen: Important? Of course. As important? No chance.

Dethier: Maybe not now. But it may matter more as time goes on, because it’s a concrete reminder that he has won more PGA Tour events than any other golfer in history, even as memories begin to fade.

Bastable: He said after his win today that he started thinking 82 was gettable after he reached 50 Tour victories, so it’s undoubtedly a target for which he’s been gunning. But given the question marks around Snead’s record and the sanctity of Jack’s achievement, yeah, there’s no doubt 18 stands above all other figures.

4. How does this change your expectations for Woods for the 2019-20 season?

Bamberger: He can win anytime he plays if he can make the swing he made in Japan and putt his ball as he did there, too. You can see him contending one time in five. That doesn’t mean he will win, of course. But he could.

Sens: If he stays healthy, he should be right in the mix at Augusta again.

Kerr-Dineen: For sure. I thought Tiger was going to have an uneventful, rusty return, and I couldn’t have been more wrong. Tiger’s coming back hot. His game’s in good shape, and he’ll be ready to roll by the turn of the year.

Dethier: Yes, it does. Tiger is the No. 6-ranked golfer in the world, and at the moment that actually feels about right. That much was not true when we last saw Woods, when he went WD-T37 in the playoffs and failed to qualify for East Lake.

Bastable: Michael’s right. It’s all about Tiger’s putter. It was like old times this week — he seemed to make everything within 15 feet, just willed the ball into the hole. If his putting stays sharp, no reason he can’t and won’t win three more times before the end of August.

5. After this, Woods has got to pick himself as a playing captain for the Presidents Cup, right?

Bamberger: As Gary Woodland said so perfectly, it’s dumb if he doesn’t. Good for the event, for him, for the team.

Sens: Right. I would not have expected this a few weeks ago but it’s now all but a done deal. Note to self: for once and for all, learn your lesson and stop doubting Tiger.

Kerr-Dineen: There is a zero percent chance Tiger doesn’t pick himself for the team, assuming no major injuries. He’s the obvious pick, and absolutely the right one.

Dethier: Yes. Even better, Woods will have more time to emotionally recover than he did last year in the abbreviated days between the Tour Championship and the Ryder Cup. Forget the captainship, which I find generally overrated. I’m excited to watch Woods take on Royal Melbourne, which should play differently than the Tour courses we see most weeks.

Bastable: Now that he’s playing so well, it would be a truly magnanimous gesture to give his playing spot to one of the kids — Wolff, say, or Morikawa. Tiger has never mastered magnanimity.

Bamberger: It was time for new blood 20 years ago. Yet the familiarity was comforting.

Sens: It was fun while it lasted, and it lasted a long time. A change makes sense.

Kerr-Dineen: Two legends of the game and of CBS, but with the ongoing courting of the PGA Tour ahead of its new rights deal, this was an important message from CBS to the powers that be. Things are getting freshened up for the better.

Dethier: Man, I dunno. I think I was a bigger McCord fan than most, and I thought he made those in-between moments far more entertaining in a way that still felt in keeping with the broadcast. I’m all for freshening up the broadcast, but only if it’s an actual improvement. I’ll remain open-minded, but this isn’t an automatic win.