Tour pro gets into hilarious encounter with venomous snake: ‘Please don’t go in my golf bag’ 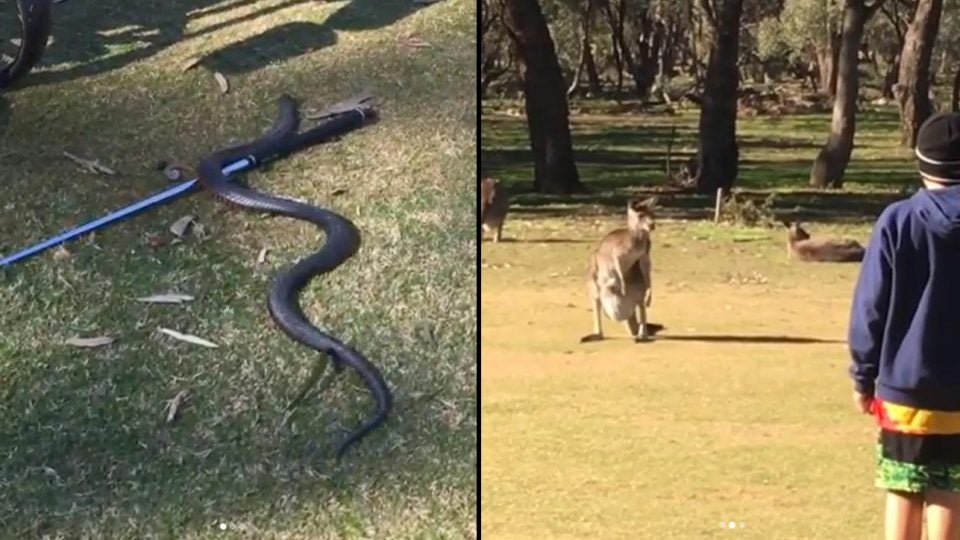 Sturat Appleby and his family had multiple encounters with wildlife during a recent round in Australia.
@stuartappleby59

He’s not the biggest name in the game, but PGA Tour veteran Stuart Appleby is a high-quality follow on Instagram. The Australian pro has a dry sense of humor second to none in the game, and it was on full display with his latest post. The nine-time PGA Tour champion had a run in with some “famous Australian animals” (including a venomous snake) during a recent round with his kids, and his commentary is a must-listen.

Appleby spent the day at Cohuna Golf Club (a.k.a. the “Home Course of Stuart Appleby”, as the club’s sign reads) with his kids and his dad. During their round, the group came across one of Australia’s many large venomous snakes.

As his son warns him of the danger “he’s poisonous,” Appleby pops out his phone and offers his own opinion, “He’s cute.”

Then the snake, which appears to be a red-bellied black snake, races away from the camera and towards Appleby’s clubs, as he pleads, “Please don’t go in my golf bag.”

Once the danger had passed, the Appleby family came across a large group of kangaroos laying down in the one of the fairway’s at Cohuna. That encounter resulted in yet another video where Appleby’s commentary really shines through.

Finding some of Australia’s famous animals all in 9 holes.

When they spot a female kangaroo that appears to have a juvenile kangaroo in its pouch, Appleby quips, “She’s got her joey… or she’s been on an egg and bacon sandwich diet, one or the other.”

Then when his son starts walking towards the kangaroos, Appleby asks, “Are you gonna do a crocodile hunter, Stevey Irwin, a little wrestle job on it or what?”

Tournaments
Masters 2019: No animals at Augusta National? Here’s a snake eating a squirrel

As he jokingly eggs his kids on (“Come on, boys, do it!”), Appleby’s own father voices a word of caution, telling the boys not to get too close, which Appleby is not happy about.

“Ah I want to film them Dad while they have a wrestle, like you get $10,000 on Funny Home Videos or something,” Appleby complains to his dad. “Kid getting mauled by a kangaroo is great video footage.”

Fortunately, at least as far as we can tell, there were no maulings on this day, and the Appleby family is safe and sound at home in Australia, with one more quality family photo to enjoy.