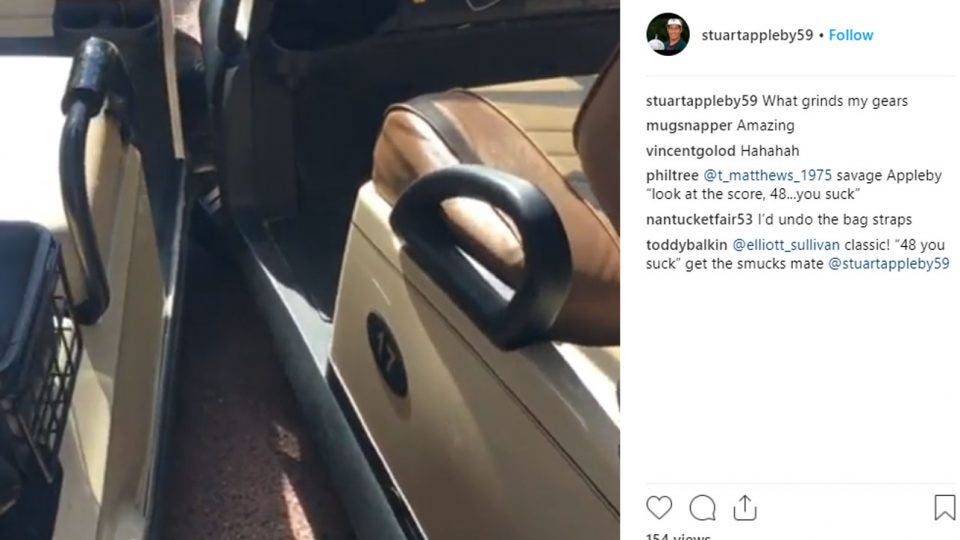 Most people have gone through the frustrating experience of having their car boxed-in by another vehicle in a parking lot. When you’re a PGA Tour pro, the same thing happens with golf carts. And when you’re Australian pro Stuart Appleby, such an act does not go unanswered.

When Appleby left the gym at the Isleworth community he lives in Saturday morning, he was dismayed to find that his golf cart was boxed-in. Someone had parked their cart right next to Appleby’s, with the front right tire blocking Appleby from moving.

He was none too pleased, and decided to film the incident for evidence, while adding some hilarious commentary.

Appleby opens saying, “I come out from the gym today… and some shmuck who’s trying to get in my head deliberately jammed his golf cart [into mine].” He then investigates the cart to find the name of the golf cart offender, all while continuing the narration.

First, he checks the scorecard attached to the driving wheel. “I don’t know if I can recognize any of this, if it’s legible. Look at the score, 48, you suck,” before comparing that score to the IQ of the golf cart owner.

He then rummages through the golf bags, declaring, “I will get to the bottom of this.”

What grinds my gears

Not satisfied to let things be, Appleby decided to get some payback. In a video posted soon after, Appleby explains that he decided to turn the battery around in the Bushnell rangefinder belonging to his golf cart nemesis.

He topped it off with a quality Australian turn of phrase: “Suffer in your jocks, pal!”

Before anyone overreacts, Appleby meant no harm by the “prank” and maintained a light-hearted tone throughout the videos. In fact, there’s a good chance he knows the offender given his residence at Isleworth (which used to be home to Tiger Woods).

A nine-time PGA Tour champion, Appleby last entered the winner’s circle on Tour in 2010 at the Greenbrier Classic, where he shot a 59.