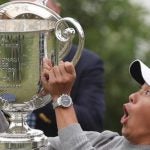 Collin Morikawa's trophy fumble holds its place among the most viral moments from the 2020 golf season.

It’s been a long year for golf, but not as much for Golf Twitter. There’s rarely ever a shortage of viral content in the golf world, and 2020 proved to be no exception. From the year’s earliest events to the layoff, and the return to golf to the November Masters, there was hardly a dull moment in golf’s 2020.

Without further adieu, we present the 16 most viral moments of the 2020 season.

The Farmers Insurance Open gave us our first real Tiger Woods highlight of the 2020 season. On Sunday, Tiger was in vintage form, dunking his approach shot in the cup from the middle of the fairway, only to have it bounce off the bottom of the hole and back out.

Alex Rodriguez might not be much of a golfer, but he is owner of one of the world’s most eclectic golf bags. After accidentally tossing the wrong bag in his trunk on his way out the door, Rodriguez rolled up to the Genesis Invitational in February with a collection of odds-and-ends to the delight of golf fans everywhere. Of course, this isn’t A-Rod’s real bag, but it is one of the great stories of the 2020 season.

3. Tom Brady goes from goat to GOAT at the Match II

After the first three holes of the Match II, Tom Brady had some wondering whether he’d showed up to Medalist with A-Rod’s golf bag. The GOAT had come out of the cannon looking like a goat, shanking his drive off the first tee and receiving a rules refresher in the woods off to the left of the fairway.

But as he reached the turn, Brady’s game started to round into form, capping off with a brilliant hole-out from the fairway that set Charles Barkley (and Twitter) ablaze.

Dustin Johnson found himself in a unique position at TaylorMade’s Driving Relief event at Seminole Golf Club in Jupiter, Fla. Due to social distancing restrictions, the World No. 1 was left to carry his own bag for the afternoon. Things seemed to be going well until the back nine. As he’s done countless times, Johnson bombed his drive off the tee and followed it down the fairway. The only problem? He’d left his bag next to the tee box.

There are a few Bryson moments that could be considered in the “most viral” category, from the first unveiling of his bulky new frame in January to the infamous “fire ant” incident to his historic breakthrough at the U.S. Open. All said, Bryson was perhaps golf’s single-most viral figure in 2020.

6. Rory all-class at the PGA Championship

Rory McIlroy received the free drop to end all free drops after an on-course reporter accidentally stepped on his ball during the first round at the PGA Championship. While he could have given himself an advantageous lie for an easy up-and-down, television microphones picked up Rory intentionally burying his ball further into TPC Harding Park’s rough in order to properly recreate the lie as it had been. Rory made bogey on the hole, but earned the respect of the golf world for his candor.

Phil Mickelson was far from contention by the time Saturday at the PGA Championship rolled around. Perfect time to get away from the course, right? Wrong. Lefty finished his round and promptly headed to the broadcast booth, where he made his on-air debut for CBS.

What followed was close to an hour of pure gold. Phil was hilarious, insightful, and authentically Phil, 100 percent of the way. After his performance at the PGA (and later, at the Match) Phil might just have a future in the booth.

Collin Morikawa closed out his first-career major with one of the clutch shots of the year at the PGA Championship. For most of the week, he wore the demeanor of a golfer twice his age. But when it came time to celebrate with the Wanamaker Trophy, he had his first rookie moment.

Morikawa picked up the trophy and watched in horror as the lid flipped off and fell at his feet. As our Sean Zak pointed out, that’s not the first time the trophy has fallen.

At the beginning of the summer, Sophia Popov was so unheralded that she’d begun caddying for her friends on the LPGA Tour to earn some extra cash. She was a regular on the Symetra Tour, the LPGA’s development tour, with hopes of beginning a post-playing broadcast career. By the end of the summer, she was a major champion and proud owner of a $675,000 winner’s check. In just one weekend, Popov won the first-ever AIG Women’s Open at Royal Troon and 2020’s best underdog story.

We’d heard for months about the challenge that awaited the world’s best at Winged Foot for the U.S. Open. But when the time finally came for national championship week in September, some were disappointed. On Thursday, course conditions were surprisingly forgiven as the USGA ensured all groups finished by twilight.

By the weekend, though, Winged Foot was back in all its glory. With conditions drying out on Saturday, Danny Lee walked to the 18th green looking to get the heck out of town. Six putts and a sextuple bogey 10 later, Lee served as Winged Foot’s cautionary tale for the week.

Golf’s best controversy of 2020, HoodieGate, deserves its own special place in the year’s most viral moments. Tyrrell Hatton won the European Tour’s BMW PGA Championship and unknowingly ignited the Twittersphere. Hatton, who wore an Adidas hoodie for all four days of his win, would soon become the subject of sternly worded tweets from golf fans who felt his attire was unprofessional, unbecoming, or downright unfashionable.

Irrespective of where you fall in the controversy (though, let the record state, there IS a right side of this argument), it’s hard to argue that #Hoodiegate earned its spot among the year’s most viral moments.

12. Is this the coolest way to watch golf?

Drones have been the device of the future for what feels like 10 years, but at the beginning of March, they made good on their promise to golf fans. In an insane viral video, racing drones captured footage of a few golfers teeing off throughout the course of the round. The result was pure internet gold.

The BMW Championship might not have held the highest purse of the three FedEx Cup Playoff events, but it certainly held the most drama. In the waning moments on Sunday, Jon Rahm and Dustin Johnson combined to make not one but TWO miracle putts. The first came on the 72nd hole, with Johnson needing to drain a LONG birdie to force a playoff. As he did all year, Johnson had the Midas Touch, dropping a bomb to send the tournament to extra holes.

But a few moments later, Rahm made the golf world forget all about DJ’s effort, pouring in a 66-footer (!!!) en route to victory at the BMW and giving us a moment we wouldn’t soon forget.

14. The Great Wall of Dinah

The ANA Inspiration featured some of the best golf we’ve seen all year. It also featured unequivocally the most hilarious sponsor-created contraption we’ve seen all year. “The great wall of Dinah” (as it came to be known) became part-backboard, part-social media punching bag throughout the week at Dinah Shore. Still, we’re forever grateful for the jokes that followed.

The November Masters was the golf world’s primary source of intrigue for months. How would vaunted Augusta National present itself without azaleas, without patrons, and without pimento cheese sandwiches? Well, as it turned out, pretty well. But even if Dustin Johnson’s triumph didn’t quite provide us with the shot of viral adrenaline we’ve come to expect from the Masters, Rory McIlroy more than compensated during his opening round Thursday.

After McIlroy seemingly pumped his drive on the 13th off the face of the earth, he found himself wandering through the forests of Augusta for his tee shot. After a prolonged search alongside a green jacket, he found his ball and promptly apologized to those in the trees with him for the trouble.

Tiger and Charlie Woods proved to be golf’s last true viral moment of 2020, sneaking in their performance at the PNC Championship in Orlando in mid-December. The father and son duo were one of golf’s great stories in 2020 — with young Charlie’s impressive golf game serving as the perfect addition to Tiger in Dad-mode.

The two Woods’ were funny, they were authentic and they were remarkably entertaining to watch. In other words, the perfect tandem to closeout an astoundingly imperfect year.