11 Random St. Andrews Facts That You Can Impress Your Friends With 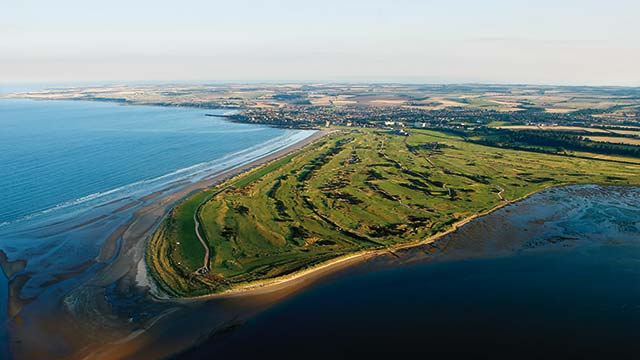 There’s only one thing more enjoyable than watching the Open Championship telecast with your buddies over coffee and Cap’n Crunch, and that’s seeing the awe in your friends’ eyes as you wow them with your vast knowledge of the Old Course and it surrounds. Unprepared? Fret not. Here are 11 pieces of St. Andrews curio that will save you a trip to Wikipedia.

1. Saint Andrew was one important dude

St. Andrews takes its name from the patron saint of Scotland, who was believed to have been one of Jesus’s apostles and who was crucified by the Romans in the first century A.D. Legend has it that a Greek monk known as St. Rule received orders from an angel to transport St. Andrew’s remains to “the ends of the earth.” And, no, he didn’t wind up at Bandon Dunes.

A man, a plan, a canal: Panama. That’s a palindrome. So is the Old Course in the configuration of its pars. No matter how you read the scorecard, backward or forward, the order of its pars plays exactly the same. 3. Gary Player once overnighted on the beach next to the Old Course…

In the lead up to the 1955 Open, a man not yet known as the Black Knight showed up at St. Andrews for the first time, and quickly got acquainted with the sand. Lacking the wherewithal to afford a hotel room, a penny-pinching Gary Player bundled himself up in a woolen sweater and, as he tells it, bedded down for the evening on West Sands Beach, which flanks the Old Course along the Firth of Forth.

4. …and that’s not all that beach is famous for

In 1981, the Open was staged at Royal St. George’s but the best slow-motion camera work from that year took place at St. Andrews. Remember the training scene from Chariots of Fire? The one with the treacly soundtrack and those aerobicized guys in underwear running on the beach? It was shot on the same stretch of shoreline where Player camped out.

Four-time Open champion Old Tom Morris (pictured) was born in St. Andrews in 1821 and lived long enough to merit his moniker. He was nearly 87 when he died after falling down the stairs in the clubhouse of the New Course. His son, Young Tom Morris, was not so lucky. He died at 24, after an apparent heart attack, though in his short life he matched his father with four Open wins. Both Toms are buried in town at St. Andrews Cathedral, as are the partial remains of Saint Andrew himself.

6. The local university spawned the world’s most famous couple

Established in 1413, the University of St. Andrews is the oldest university in Scotland and the site of many notable scholarly pursuits. One of those pursuits involved Prince William, who wooed his future wife, Kate Middleton, while both were studying on campus. Another involves the paparazzi, who haven’t stopped following the couple since.

7. Sir Nick shares something in common with His Holiness

Since 1921, the University of St. Andrews has conferred honorary degrees on a lengthy list of luminaries, including a trio of golf-world legends: Severiano Ballesteros, Sir Nicholas Alexander Faldo and the big-hitter himself, the Dalai Lama. 8. You can play the Old Course to your heart’s content for less than $300 annually

Here’s one way to play the Old Course in peak season: fly across the Atlantic, show up at daybreak and ask the crusty starter to put you on the wait list. The round will cost you about 260 bucks, airfare not included. Another way to do it is to fly across the Atlantic, establish residency in St. Andrews and become an annual member of the St. Andrews Links Trust, which grants you year-round access to the Old Course (as well as the six other courses the Trust oversees). That membership will cost you $290, airfare not included. You make the call. 10. An obelisk marks the spot of the Old Course’s first first tee

When people in St. Andrews speak of martyrs, they don’t mean the guys who whine when they shank an iron shot. They’re referring to the Protestants who died fighting for their faith in the 1500s, and whose lives are honored by the Martyrs’ Monument, a stone obelisk that overlooks the Old Course, from grounds that used to serve as the first tee.

Sure, the spat between Carl Spackler and that pesky gopher seemed bad at the time. But it was barely a kerfuffle compared to the golfer-vs.-varmint conflict that broke out on the Old Course two centuries ago. It began in 1799, when a cash-strapped Town Council sold the local links to a pair of rabbit breeders, raising the hackles of local hackers, who fought for the right to hunt the critters (the rabbits, that is, not the rabbit breeders). The battle, which became known as the “Rabbit Wars,” dragged on for another 16 years, in the courts and on the course, until a local landowner and golfer named James Cheape purchased the links. Those wascally wabbits were never a pwoblem again.