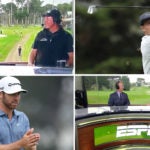 Sure, Collin Morikawa took home the hardware — but who else won the PGA Championship?

Look, we’re well aware that Collin Morikawa won the PGA Championship. That he took down the first major of his career, moved to No. 5 in the world, made nearly $2 million dollars, hit arguably the greatest shot of the golf year and generally set an unattainable standard for human excellence.

But we’re here to spread the love around. Who else showed well at TPC Harding Park? Who walked away winners despite a lack of oversized check and (dented) trophy? Here are 10 people, places and ideas who should be leaving northern California, heads held high.

Specifically, Morikawa on drivable par-4s. It seems like every time we get a crazy leaderboard pileup, somebody busts it open with a wild late move, and that is exactly what happened on Sunday at TPC Harding Park.

We knew Morikawa had a flair for the dramatic — or at least, cold blood under pressure — when he stepped to the tee at No. 14 at Muirfield Village at the Workday a few weeks ago. From 312 yards, to 11 feet …

Then on Sunday, he won the PGA Championship with the same recipe. Driver on a tightrope-thin line. Eagle. Tournament over. This is about as big a statement shot as I can remember an emerging star making since I started this job. Give it a watch, one more time:

The larger point (besides Morikawa’s ascent to stardom) is this one: Drivable par-4s midway through the back nine make for some extra drama and variability, every single time. Those half-par holes are double the fun.

One of the reasons golf delivers such spectacular Sunday evening entertainment is because of the jockeying for position down the stretch. Tension builds. Names rise and fall. The strong emerge from the pack.

Well, it’s bigger fun with a bigger pack, and that’s exactly what we had midway through Sunday evening’s round when seven (!!) players were tied for the lead, with several more just one shot back. At that point, Scottie Scheffler was tied for the lead and his name couldn’t even fit on the first page of the CBS leaderboard. At that point, it seemed impossible that they would avoid a playoff, forget a two-stroke victory.

Let’s take a look at the final leaderboard, with driving distance in parentheses.

Six of the top 10 players in driving distance (all drives measured) ended up in the top 10. Speed kills. Unless you’re playing against Morikawa.

Look, nobody is saying that running a golf broadcast is easy. But ESPN had a number of elements, some simple, some technical, that took its show to the next level. Early in the week, with action going on everywhere, ESPN’s frenetic pace was welcome, bouncing from shot to shot.

Scott Van Pelt was the captain of ESPN’s good-times boat this week. His attitude — show a lot of golf, add value where you can and share the fun that you’re having with the viewer — is such a winning combination that if he could bottle it and sell it, a whole bunch of broadcast partners would come calling. The late-night ESPN broadcasts on Thursday and Friday were particularly fun; they called to mind ESPN’s late-night SportsCenters of old, where things get a little loose in a good way.

When van Pelt signed off for the final time on Sunday afternoon, I realized how much I’ll miss ESPN’s presence in the golf broadcasting space. Until we meet again, Worldwide Leader.

Of all the dozen or so competitors who entered the conversation on Sunday afternoon, Wolff impressed me the most with his ridiculous tee-to-green play on Sunday afternoon. To simplify things, let’s take a look at this stats for the week:

3rd in driving distance (all drives)

2nd in strokes gained off the tee

Wolff called it “probably the best ball-striking week of my life.” Oh, and did I mention it was the first major championship of his life?

While ESPN was the cool new kid on the block in this week’s broadcasting battle, CBS rolled out a particularly fun wrinkle on Saturday when Phil Mickelson joined the booth after finishing his morning round. He gave unique, Phil-only insight, the sort of thing we saw on display in his golf cart at The Match II. His solid rapport with Jim Nantz called to mind the way Tony Romo has re-energized Nantz during football broadcasts. And he gave it to Nick Faldo pretty good, too. Mickelson was understated but funny in describing the appearance.

“[Nantz] just sets things up well,” he said. “And then obviously to have a wonderful target like Nick, that made it nice, too.”

Mickelson downplayed the appearance further, calling it “easy.” But isn’t that the entire point?

“Did I enjoy it? Yeah, I enjoyed it because I felt it was easy with having those two guys there. I thought that Nantz just makes it easy. The way he sets you up to talk about areas of insight, he just makes it easy. I’ve always had a good rapport with Nick Faldo going back to when I played with him as an amateur in the Masters and he was really kind to me, and I’ve always enjoyed his kind of wit and British humor. So we’ve always had some good banter at the Champions’ Dinners, and it was just an easy environment to spend an hour or so.”

If it’s an environment he’d like to spend more time in going forward, I don’t think Mickelson would have a hard time getting someone to sign the check.

As the caretaker of our Muni Monday vertical, I’m biased, but this week put TPC Harding Park on its best display. To be clear, there are plenty of courses with more high-octane shock value than Harding Park, which is a fairly straightforward test. But the broadcast, if a bit fog-obsessed, showcased a gorgeous setting on Lake Merced that’s an integral part of its community and readily available to the public. We like that.

It was a young man’s leaderboard, led by Morikawa and supported by Wolff, Scheffler, DeChambeau and more, one man stood out: runner-up Paul Casey. The 43-year-old would have become the oldest major winner in decades, older even than Tiger Woods when he won the 2019 Masters. Casey, who has never been a killer closer on the PGA Tour, seemed particularly zen in his post-round remarks. Try reading these without gently nodding your head.

“I think those of you who come out and talk to me a lot, you know this isn’t the most important thing in my life. Yeah, today was just sort of cruise around the golf course and have a great time. I’ve not played great golf so far this season, so anything was going to be a bonus on where I was a week ago or two weeks ago. So I was just out there kind of having a good time. But I do think I’m in a sweet spot. It’s taken me 43 years to get there, but yeah, pretty chilled out, know what I’m capable of, and enjoying my golf.”

When it comes to staying coronavirus-free, golf obviously has massive advantages over a sport like college football. But as sports seasons get canceled, limited and postponed left and right, golf’s bubble stands relatively intact, providing stark contrast through a success story of keeping cases remarkably down.

Of the players who won without winning, one more bears mention: Bryson DeChambeau. That’s because the rebuilt, reborn, bulked-up Bryson didn’t seem to have his best week. He missed a number of opportunities, too, misreading putts, fluffing chips and hitting a few mediocre wedges — and that was just during Sunday’s 66, which left him T4. He still nearly won!

In short, DeChambeau seems to be adding up all those little casino-style house advantages and cashing them in. Despite it all, DeChambeau had a putt to tie the lead on No. 16. He’s likely to be a factor at Winged Foot in September, and he’s even more likely to be a factor at Augusta in November. For a guy who had never finished inside the top 15 at a major championship, this was a victory — and a sign of things to come.