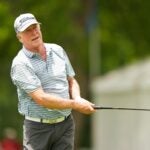 Michael Allen shared quite a story on this week's episode of Subpar.

Michael Allen has had a long career in professional golf. The 63-year-old currently competes on the PGA Tour Champions where he has eight victories, including the 2009 Senior PGA.

But it turns out, the most competitive action he’s seen in recent years may be happening off the pro circuit.

On this week’s episode of GOLF’s Subpar, Allen talked extensively about his love for Mesa Country Club in Mesa, Ariz., and how much fun he has playing with a number of pros who are members there, including Joel Dahmen and Brandon Harkins. Allen also plays a lot with Gary McCord, who had a starring role in an epic story he shared about how a $10 Nassau spiraled into an extravagant wager.

“I think it was actually more than that, but we’ll go with that,” Allen responded, as the guys all laughed.

For more from Allen, including why Jon Rahm’s training regimen is so impressive, check out the full interview below.