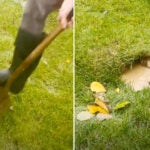 Amid the usual flood of content on Twitter last week appeared a striking video of a flooded yard in Washington state. Heavy rains had drenched the property. But rather than pool atop the grass, the water welled up underneath it, causing the saturated ground to sway and bulge.

On BuzzFeed, which reposted the video from Twitter user @aleximckinley, the swollen turf was described as “nature’s pimple.” But in agronomic circles, the phenomenon is more commonly known as a “water blister.” At least, that’s what David Phipps calls it.

A former superintendent, Phipps now serves as Northwest regional representative for the Golf Course Superintendents Association of America, a job that brings him into contact with all kinds of turf-care issues. We asked him for the lowdown on water blisters, the common causes, and the cures.

How water blisters come about

In the Pacific Northwest, where he lives and works, Phipps says that water blisters pop up frequently on golf courses, usually brought about by heavy rains or underground irrigation breaks. As water accumulates, the turf separates from the soil, creating a surface so loose and squishy that walking on it is a bit like stepping on a waterbed.

The phenomenon is especially common with turf types that are prone to producing a thick thatch layer, such as bentgrass and Kentucky bluegrass, and more so when the soil itself is heavy clay where roots don’t penetrate deeply. In such conditions, trapped between the poor-draining clay soil and the thatch, the water has nowhere to go. The turf keeps bulging and bulging, until the shallow roots get dislodged.

What to do about water blisters

In the video of the flooded yard, the property owners are shown opening gashes in the turf with a shovel so that the water can come gushing out. (“Popping nature’s pimple,” to borrow from BuzzFeed).

Nothing wrong with that method, Phipps says. On a course, you might employ it if you wanted to make the ground semi-playable sooner (not that many people are going to want to play in such sodden conditions).

Otherwise, though, there’s no pressing need to address a water blister. All that water underneath it is not bad for the grass. You can simply let it runs its course. Eventually, it will seep back into the soil and, Phipps says, the grass itself will re-root when conditions are favorable.