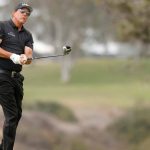 It’s no secret that the architecture of Torrey Pines leaves something to be desired. Design buffs will point to the mundane collection of par 4s and lack of oceanside holes as reasons for their criticisms, and their arguments have merit.

But while the keyboard warriors and armchair architects have criticized Torrey Pines as a worthy U.S. Open venue, players have been mostly pleased with the course. The USGA has fielded harsh criticisms regarding its setups over the years, but this week there have been few, if any, complaints.

In fact, players have largely been complimentary of how Mike Davis and Co. have approached the setup. Among them: San Diego native Phil Mickelson.

“In the 30 years that I’ve played the U.S. Open, this is the best I’ve seen,” Mickelson said. “I thought they did a remarkable job, and I’m really proud and happy that it’s here at Torrey.”

To hear such praise for the USGA from Mickelson’s mouth is surprising, to say the least. Just three years ago, he made waves at Shinnecock when he made a statement when he batted at a rolling ball on the green when he felt course conditions got out of hand.

Fast forward to this week, and Mickelson’s disposition couldn’t be more different.

Mickelson pointed out that on certain holes — such as Nos. 11 and 12 — the USGA has set them up to be difficult pars. But on others — like No. 2 — the setup allows for some low scores.

“That type of setup allows the players who are playing well to make up ground or separate themselves from the field,” he said. “They just did such a great job here. I’m very impressed.”

Torrey might not be a darling for golf course purists, but for the players, it has lived up to expectations.