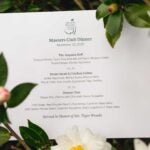 It’s a pressure-packed occasion, one that calls for clear thinking and crisp execution.

Playing in the Masters? Nope.

This year, for the fifth time in his career, Tiger Woods got to pick the menu, which was made public on Tuesday.

It’s a three-course affair that opens with a sushi roll, moves on to a mixed-plate of steak and chicken, and closes with a dessert trio of flan, churros and sopapillas, a Latin-inflected fried dough.

Multi-course dinners are like golf swings. No two are the same. But good ones are rooted in solid fundamentals.

So, how did Woods fare with his choice of fare?

To assess Tiger’s menu, GOLF.com did not seek the culinary expertise of Brandel Chamblee. We turned instead to James Syhabout, golf fanatic and two-Michelin star chef of Commis, in Oakland, Calif.

After chewing on the matter, Chef Syhabout served up these takeaways:

“When I saw the name, I figured, ‘It will probably involve pimento cheese, maybe bits of country ham and other other elements that were somehow connected to Augusta.’ But when you look more closely — tempura shrimp, spicy tuna, eel sauce — it’s basically the kind of roll that could find in sushi restaurants anywhere in the country. If I were going to call something an Augusta Roll, I’d want it to have a stronger sense of place.”

“It’s pretty unusual to have an entree with steak and chicken on the plate, but I guess you could look at this as a kind of mixed grill. I can understand it. He’s wants to serve food he likes, but he’s also got to consider other tastes at the table. Maybe there’s somebody who doesn’t eat meat. He’s covering his bases.

“The fact that this dish and the dessert that follows both have a Mexican theme makes me look back at the Augusta Roll and think it’s a bit out of place. On a multi-course menu, ideally you want to have consistency and flow, where the sequence of dishes makes sense. Looking at the Augusta Roll, I’m thinking it might have been good to swap that out with a Mexican-style shrimp cocktail, with chiles and lime and maybe Saltines. That way, you’re still moving from surf to turf, but you’re staying more on theme. But to each his own. And I’m glad to see he’s using good ingredients.”

“This feels like a good fit with the rest of the menu, which is definitely very carb heavy. Tiger is really clubbing up here. Probably helps if you’re out walking a hilly course all week. It’s comfort food, too, so maybe it’s good for Tiger’s back.”

“I think of these as classic country club wines. Buttery Chardonnay. A big oaky Cab. Do we know that Tiger picked these himself? I would think that they probably have a sommelier doing the pairings. But either way, I would say the red matches well with the food. Maybe you’d want something a little lighter and brighter for the white.”

“It’s a rich menu, for sure. I was thinking maybe Tiger is trying to weigh his opponents down and set them up for failure. The theme also isn’t entirely consistent. But in the end, Tiger is Tiger: He gets to have what he wants for dinner. I would guess that this is a pretty fair reflection of the way he likes to eat.”