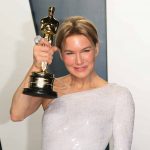 A new golf movie will have an Oscar winner as its headliner. According to media reports, Renee Zellweger will star in a golf comedy called The Back Nine.

According to The Hollywood Reporter: “Zellweger will play a former golfer who set her clubs aside to make way for her husband’s pro career and to raise her son, only to decide to turn pro during the ‘back nine’ of her life after her marriage goes into free fall.”

Michael Patrick King will direct the movie for Landline Pictures, which was formed by Amy Baer. King was a director, writer and producer for Sex and the City and the creator, writer and executive producer for 2 Broke Girls. King wrote The Back Nine script with Jhoni Marchinko and Krista Smith.

Zellweger, who has starred in several movies and television shows, recently won an Oscar for Best Actress in Judy.

“Jhoni and Krista and I are very excited to have the amazing Renee Zellweger do our movie The Back Nine,” King said in a release. “A stunning actress with incredible range, she can make you laugh and cry and has a great golf swing. What more could anyone want?”

A release date for the movie has yet to be announced.

5 picks I love at the Farmers Insurance Open, according to a professional gambler

Hitting the links? Our 'Play Responsibly' shirt might be for you

On the court, Stephen Curry is lethal. On the course? He’s scoring just about everywhere