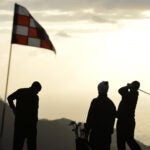 Play enough rounds of golf and you'll likely get paired with a famous playing partner.

You’ve played golf alone. Or with one, two or three people you know well. But, very likely at some point in your golfing life, you’ve also been matched with someone you are meeting for the first time on the first tee. And every so often, that stranger does or says something so unusual during the round that you remember him or her way more than any of their shots. Welcome to our three-part ode to the most memorable of those random partners. Part I is here. Part II is here. The grand finale, Part III, is below and features more celeb groupings. — Nick Piastowski

My 9.5 rounds with Donald Trump

My most notable playing partner has been Donald Trump, long before he sought the presidency. I have played three courses with him, all bearing his name, two of them multiple times, 9.5 rounds, all together. (One day with 18 holes plus an emergency nine.)

In one round, Melania drove up in a cart, mid-round, with Barron in the passenger seat. Barron was maybe 3 or 4 years old. He had a nice swing, and the father was appropriately encouraging. Sometime later, I asked Trump how Barron was coming along with his golf. “He’s not playing at all,” Trump said. His disappointment was palpable.

I remember thinking in that period that Trump would be good as an LPGA commissioner, because he liked golf, knew some of the top women pros and was a natural salesman. But that was a long time ago. — Michael Bamberger

My local muni is perpetually busy, but when the weather drops below 60 degrees, the place clears out, which I always find strange. I’m not complaining, though. When the weather dips, I try to seize the opportunity for a few holes, like I did one Friday afternoon in the fall of 2019. I showed up and was the only guy on the course, so they let me go straight out as a single. I love playing alone, so I was chuffed.

I hit my first drive and started walking down the fairway when a guy pulled up in a golf cart, smoking a big cigar, and asked if he could join. I unenthusiastically agreed.

He wasn’t an especially tall guy, but he was clearly a good player with a quirky-but-athletic golf swing and an understated Southern accent. He hit his drive, and we were off. I hopped in his cart, and we started talking, as golf partners often do. We talked about his upcoming golf trip to Hilton Head. I asked him about cigars. We shared some swing advice and laughed about all the golfers who weren’t taking advantage of the empty course.

I couldn’t help but notice his putter. It was an old-school Scotty Cameron that looked like a custom, and it had “J.S.” engraved on it.

He was retired now, he said, but owns a cigar shop in town and does some work for the New York Knicks. I told him I don’t know anything about basketball but I heard the Knicks weren’t very good. He laughed.

That was the end of that. He asked where I was from and I told him England, so we started talking about England and then golf once again.

John was a nice guy, and when the round was over, I told him I enjoyed it, which I genuinely did, and we shook hands. We’d play again the next time the weather’s like this, he joked, and that I should stop by the shop to say hi in the meantime. As I walked away, I caught a glimpse of the name on his bag tag.

The name rang a bell, but I wasn’t sure why, and I didn’t think about it again until later that day, when my coworkers explained to me that his name was “Starks” not “Sparks” — and were furious that I had failed to recognize the significance of playing with a Knicks legend.

Like I said, I know nothing about basketball. — Luke Kerr-Dineen

Actor Richard Kind is the consummate “that guy from.”

That guy from Mad About You. That guy from Curb Your Enthusiasm. That guy from Red Oaks. That is in no way meant as a dig at Kind’s acting chops — he was nominated for a Tony in 2013 — but more so a reflection of how he’s typically cast: in supporting roles.

On the golf course, though, Kind ably fills the post of leading man, or at least he did on a sunny, late-fall afternoon in Philadelphia last year when I lucked into his foursome. When I met Kind on the 1st tee, two things struck me: his wiry gray quarantine beard (I had seen him only clean shaven) and the tube socks covering his calves. Way more tourist than Tour pro. I liked him already.

Kind, like most of us, is a middling player, but he’s crazy about the game and surely the only member of L.A.’s exclusive Lakeside Golf Club who also is a regular on the munis of South Jersey. An everyman with access.

What most surprised me about the round was that he seemed genuinely interested in getting to know me. For every question I asked him about improv (he was a Second City guy) or Larry David, he’d ask me a question about my job, my kids, where I lived.

We all carried our own bags that day, with a forecaddie tagging along to help with reads and yardages. On the back nine, our looper asked Kind, who is 64, if he could help him with his bag. “No,” Kind said firmly, “I like carrying my own.”

I liked him even more. — Alan Bastable

One of my most memorable days on the golf course from a “who-did-you-play-with” perspective came back in 2018, when I attended PXG’s media day at Scottsdale National.

I was paired with two bona fide stars: then-Arizona Diamondbacks pitcher Archie Bradley and the LPGA’s Alison Lee. I rode in the cart with Archie, and he was a total blast. We even took shots of tequila at the turn — totally not the norm for my rounds, but I loved it.

Afterward, the PXG staff players hung around and joined the remaining media members for a quick spin around Scottsdale National’s Bad Little Nine — a diabolical short course where every green is tiny and surrounded by ultra-scary bunkers. But even more frightening than the bunkers was the fact that we played as a 12-some, meaning the mere mortals (of which I was one) had to hit short irons to nearly impossible hole locations in front of the likes of Lydia Ko and Pat Perez. Talk about intimidating!

I’m hard-pressed to remember a similar level of tee-box terror before or since. — Jessica Marksbury

Like every junior golfer growing up, I hoped one day to make it on the PGA Tour. Obviously, that didn’t pan out. I did, however, manage to play Division I golf before eventually giving up the dream. People often ask me why I never “gave it a shot.” This is the story I tell them.

One year, during a PXG club launch event, I was paired with LPGA superstar Lydia Ko. This was the perfect time to see where my game actually stacked up. Same tees, same conditions, same course. I wasn’t nervous — just genuinely curious what would happen. In the most casual manner possible, Ko cruised to a nine-under 63. I outdrove her all day and hit the ball OK — and lost by 14 strokes.

My cold putter didn’t help, but in the casual round we played, she didn’t even break a sweat; she was smiling and personable the entire time, even helping our group with green reads and swing tips. If you think pro golfers are beatable, they’re just not. They will beat you and smile while doing so.

Thank you to Lydia for proving to me that I made the correct career choice. — Andrew Tursky

My round at Riviera — in batting gloves

It had to be mid- to late-1990s. I was new to the golf business and to golf in general. Maybe I had played 10 rounds on a handful of chopped-up munis with a few earnest pointers from some well-meaning friends. Being young and stupid, I accepted an invitation to play in the media event ahead of the L.A. Open at Riviera. What could go wrong?

I show up to check in, and who am I paired with but Peter Kostis?! I’m wearing a batting glove and using a rusted set of Wilsons, and I’m about to play a round with one of the most famous instructors and commentators in the game.

Despite what must’ve been an excruciating experience for him, Peter was very gracious and understanding as I flailed around Riv, topping one here, chunking one there. I may have even whiffed at one point. There were a couple of shots that actually connected, which Peter was kind enough to appreciate.

Thankfully, we were playing a scramble. After we finished, Peter turned to me and said, “You know what, John, I’ve never played with anybody who in the same round hit shots as sh-tty and as great as you did today.”

I think he meant it as a compliment. — John Ledesma

From tee to shining tee

I don’t profess to be an expert on much of anything, but this — the question of playing partners — does fall pretty squarely in my wheelhouse. When I was 17, I took off on a year-long road trip living out of the back of my Subaru Outback in an effort to play a round of golf in every state in the lower 48.

The goal was to see America through the lens of golf. That, by extension, meant seeing America through its courses and the golfers who played them. It meant playing a muni in Flint, Mich., in the shadow of an all-but-closed auto factory with two former GM employees. It meant exploring North Dakota’s most rugged stretch of holes alongside a livestock auctioneer. It meant seeing firsthand what a Vegas hustler looks like, finding a mark. It meant learning the language of showing up at a course looking for a game and understanding that some people will be interested, while others already have an objective for the round, one which doesn’t involve you.

The most famous group member I had that year was Phil Mickelson, whose group I caddied in at the Quail Hollow Pro-Am. More than anything I was blown away by his sheer celebrity. Imagine wherever you walk, people do the wave. The stand and they scream and they wave. That’s what it’s like to be Lefty at a Tour event.

Mickelson’s day was short-lived; he had a stomach bug. He dropped out after five or six holes — then went on to finish second that week.

My most frequent playing partner from the year, though, is someone I still often play with today: myself. There’s nothing quite like a round of golf alone to tell you how you’re feeling in other areas of your life. Are you anxious out there? Hurried? Content? Relaxed? As your own playing partner, you can be your own best friend or worst archenemy. You can build yourself up or tear yourself down, sometimes both on the same hole.

Playing golf alone can be boring, calming, stimulating, clarifying. But playing by yourself will eventually, ultimately, remind you that golf, like most great things in life, is best when shared. — Dylan Dethier