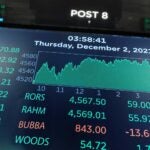 RORS, RAHM, and WOODS stock are in the green looking at 2022.

Fantasy golf, I’d like to argue, hasn’t been figured out yet. Unlike the approachable structure of fantasy football — which can be dominated by the football geek who lives on the waiver wire or conquered by an auto-drafter who hits gold — fantasy golf takes on all wickedly different forms, and none of them seem ideal.

Some leagues require weekly choices from the field, which implies repetitive research on course performance, tournament history, etc. Others are major-focused, which can be randomly conquered by any golf fan with an odds sheet but don’t inspire any true PGA Tour fandom on a weekly basis. The fantasy golf industry hasn’t elevated a system by which golf nerds can prove the depth of their knowledge, and by which the common fan can tune out, say, the Valero Texas Open.

As discussed in full on the Drop Zone podcast this week (embedded below), PTSE treats every pro golfer as a stock, using that player’s Official World Golf Ranking average as a price. Jon Rahm (ticker: RAHM) is the best player in the world, and his current stock price ($9.34) is a reflection of his most recent successes on the pro golf circuit. Webb Simpson (ticker: SIMP), who struggled throughout 2021, is trading at less than half Rahm’s value: $3.80.

We made bold predictions — and bought our own stocks — on the podcast below. Give a listen, or read on for the full explanation!

Make the most money. Simple as that. Buy up player stocks who you think will increase their value, sell off stocks once you think you’ve achieved enough value where your funds can be more impactful placed elsewhere. At the end of the season, we tally up your investment successes.

What are the rules?

The PGA Tour calendar season is broken up into four quarters, just like the typical business calendar:

Teams can Buy, Sell and Hold stocks before the start of each quarter, owning at least four stocks and at most six stocks, two of which need to be top 30 players. You’ve got $100 to spend. Sound complicated? Let us explain by showing off our own selections.

As for my picks, I believe there’s potential for both Koepka (BKA) and Reed (REED) to find themselves trading north of $6.00 after one quarter, and depending on their form I might just hold onto them for the duration of the season. Neither has really been this cheap in the last four years. On top of that, Austin Eckroat (ECK) won’t play much on the PGA Tour, but he’s capable of winning on the Korn Ferry Tour, and his price ($0.30) is just too good to beat. Finally, Bill Haas (HAAS) will have at least 15 Tour starts between now and the end of the season. If he finishes in the top 20 twice, he’ll provide good value for the portfolio.

My co-host Dylan Dethier believes there to be similar value in TRNR stock with Martin Trainer. He’s in his final year of a Tour winner exemption and showed decent form just a few months ago at the Houston Open. He’s trading at less than a quarter! Tour starts are stock opportunities, simply put. Dethier also bought in to the REED hype, but has placed the biggest amount of his funds on a KFT graduate Taylor Pendrith (PEND). The long-bomber could make some waves on Tour given his ability to shrink courses at will.

Kerr-Dineen has joined Dethier in feeling that Patrick Rodgers (PROD) is available at a low price right now. Sixteen shares is plenty at just 87 cents. If Rodgers nabs his first Tour victory, LKD, LLC will soar. Same goes for LKD’s namesake, Luke Donald (LUKE), who has apparently been speed-training. Take that as some insider info — and luckily for you, there’s no SEC in this fantasy golf universe.

Finally, Colgan Investments put together a very top-heavy portfolio. Less is more for Colgan, clearly, as he’s grabbed up shares of four top 40 players. He’s got some Justin Thomas (JUST), some Scottie Scheffler (SCHF), some Will Zalatoris (ZALA) and some WOLF. Is it too top-heavy? We may be kicking ourselves at the end of Q1 if they’re all Tour winners. If Richard Bland (BLND) shocks the world and wins another big tournament, everyone besides Colgan will be kicking himself, too.

SO, really just one question remains: Who would make your portfolio? Feel free to share by reaching out on Twitter @sean_zak or @dylan_dethier, or in email at sean.zak@golf.com. And of course listen to the podcast below for a complete breakdown!