Fantasy Six Pack: Get these players in your DraftKings and FanDuel lineups at the Northern Trust

Welcome to the Fantasy Six Pack! If this is your first time joining us, every week we highlight six golfers to use in two popular fantasy golf platforms, DraftKings and FanDuel. On each, you must select six golfers for your lineup under a specific salary cap. (DraftKings $50,000, FanDuel $60,000) A little about me: I’m a golf nut with a 4 handicap that’s trending upward (since my son, James, was born, it’s skyrocketed) and a nose for analytics — according to Rotogrinders, I’m one of the top daily fantasy golf players and ranked inside the top five of all players. Be sure to check out more of my tips at Awesemo.com. This year I’ve been able to profit more than $100,000!

Each of our studs cracked the top 20, but our complimentary players all failed to make the cut. Onward.

The Tournament: The Northern Trust

Top finishers from 2013, when Liberty last hosted a Tour event:

Skills emphasized: The stunning views of New York City from across the Hudson certainly provide a nice backdrop to this demanding par 72. It’s likely that most players will face numerous approach shots from outside 200 yards this week, so we’ll hone in on that stat. 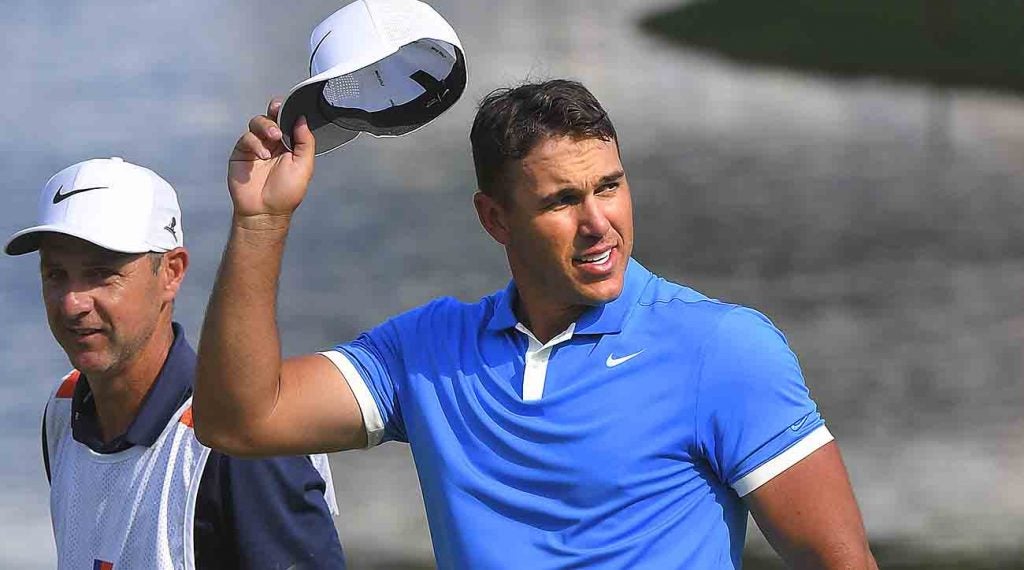 Brooks Koepka enters this week fresh off a win in Memphis in his last start.
Getty Images

Brooks Koepka (Odds: 8/1, DraftKings $12,000, FanDuel $12,200) Koepka finally proved he’s not just a “major” golfer with a dominating Sunday performance in Memphis two weeks ago. It’s not uncommon to see guys go on a hot streak this time of year, see Bryson DeChambeau winning two times in very short order last year before falling to Justin Rose for the $10 million bonus. Koepka doesn’t have a FedEx title under his belt, and with the new format, it’s important to go into East Lake with a lead.

Jon Rahm (Odds 16/1, DraftKings $10,400, FanDuel $11,700) The young Spaniard is still in search of his first major, but that’s about all he hasn’t accomplished on Tour in his short career. Recently he won the Irish Open and added strong finishes at the Open Championship and in Memphis. That’s the type of consistency you like to see when rostering a guy this expensive. He wasn’t even in college the last time the event was played here, so he brings no previous course knowledge, but I’m still taking a shot on him.

Billy Horschel (Odds: 50/1, DraftKings $8,000, FanDuel $9,800) Last year Horschel WD’d after a good finish moved him safely into the next playoff event, so I’m a little leery of taking him when he’s already 44th in the current standings and a lock for next week’s BMW. But his game does look good right now.

FedEx Cup Bubble Boy: A player who needs a strong finish to extend his season

Matthew Wolff (Odds: 80/1, DraftKings $7,700, FanDuel $9,400) The phenom from Jupiter, Fla., has been a blast to watch since joining the Tour earlier this summer. After a missed cut at the Rocket Mortgage, he broke through with a win at the 3M Open that got him into these playoffs. He’ll need another good finish this week to extend his rookie season.

“Out of Bounds” — a lesser-known player ready to break out

Carlos Oritz (Odds: 300/1, DraftKings $6,100, FanDuel $7,000) The 2018-19 Korn Ferry graduate has reached the playoffs, highlighted by a fifth-place finish at the 3M Open. He looked good last week before a sub-par Sunday, but can hang his hat on the fact that he can make his own schedule next year as a full time Tour member.

Mulligans: A struggling player who looks poised to bounce back

Jordan Spieth (Odds: 50/1, DraftKings $8,000, FanDuel $10,000) The scoring average on Saturday at the Wyndham Championship was somewhere in the -1.7 range, and that’s including the atrocity that was Spieth’s seven-over 77. That might be his low point for his winless season. He’s going through swing changes, and right now they just aren’t working.

Where to play this fantasy golf this week