Fantasy Six Pack: Get these players in your lineup at the RBC Canadian Open

Welcome to the Fantasy Six Pack! If this is your first time joining us, we highlight six golfers to use in two popular fantasy golf platforms, DraftKings and FanDuel. On each, you must select six golfers for your lineup under a specific salary cap. (DraftKings $50,000, FanDuel $60,000.) A little about me: I’m a golf nut with a trending-upwards 4 handicap (since my son, James, was born, it’s skyrocketed) and a nose for analytics — according to Rotogrinders, I’m one of the top daily fantasy golf players and ranked inside the top 5 of all players. Come check out all of my analysis at Awesemo.com where this year I’ve been able to secure a profit of nearly $100,000 dollars!

This event was last staged at Hamilton in 2012, and Scott Piercy won it.

Skills emphasized: It’s one of the shortest courses the tour will play this season, checking in at just under 7,000 thousand yards, so we know accuracy will be a key factor. One of the only ways to make a short course Tour-ready to do grow long rough and place hazards around the course, which means hitting fairways will be paramount.

I like charts because they give me a snapshot of what the players strengths are, and where they could be peaking or struggling. Koepka’s last two starts have been superb tee-to-green, He won’t be able to gain as many strokes off the tee this week, so he’ll need the irons and putter to stay hot. 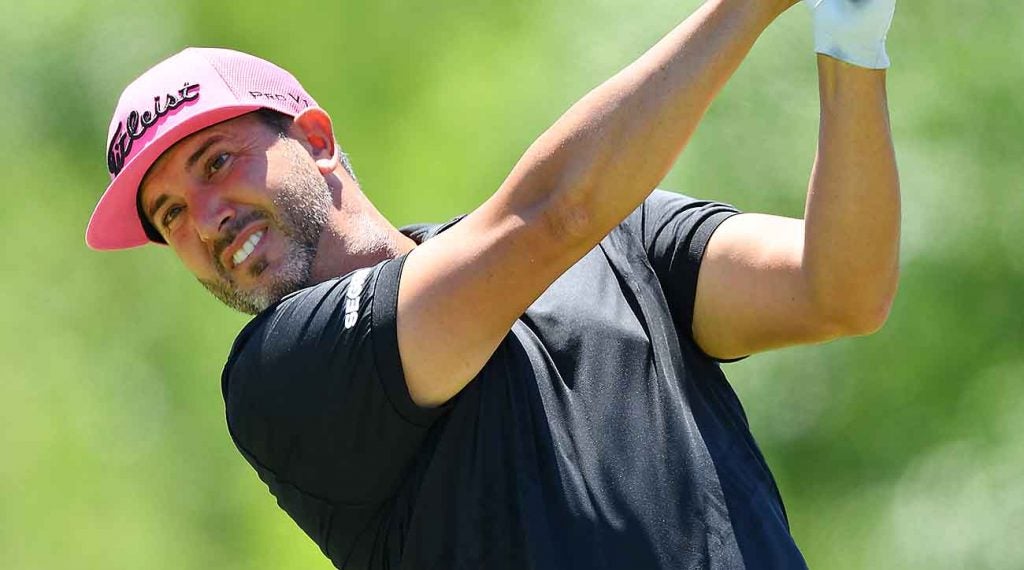 Scott Piercy (Odds: 33/1, DraftKings $9,300, FanDuel $10,500) We mentioned above that Piercy won the last time this tournament was played at Hamilton, but other factors are pointing his way. He hasn’t missed a cut since the Honda Classic (six straight). His recent starts include a 3,2, and 19th which give him confidence.

Statistically he seems to be putting it much better than his average, likely sparking such good results. He’s normally a very good ball striker, and if he maintains about one stroke gained per round, I think we can expect to see Piercy in contention again this week.

Mackenzie Hughes (Odd: 150/1 DraftKings $7,600, FanDuel $8,700) Our homer pick of the week, the native Canadian won a fall event last year, and will now look to become the first Canadian to claim this event since 1954. Hamilton Golf & Country Club will give Hughes a much better chance at winning, as he’s not a long hitter. He makes up for that with accuracy, and he hit more than 70% of his fairways at Colonial en route to a season-best 8th-place finish.

He’s usually a good putter, but as you can see, this year not so much. But recently he’s trending above his season average, a good sign.

Looks good off the tee: A player in great form who may regress

Jim Furyk (Odds: 30/1 DraftKings, $8,800, FanDuel $10,100) This recommendation is more about his price than his current form. He bounced back after missed cuts at the RBC Heritage and PGA Championships with 13th- and 33rd-place finishes, but he’s overpriced because he won this event in 2006. While this course sets up well for him on paper, I’m not sure he makes enough birdies to crack the top 15 that he’ll need to pay off his salary this week.

Out of Bounds: An under-the-radar name

Collin Morikawa (Odds: 250/1, DraftKings $6,400, FanDuel $7,000) The senior from the University of California is third in the world amateur rankings and a finalist for the Jack Nicklaus Award, which goes to the most outstanding collegiate golfer. He’s got a ton of talent and now it’s all about translating it to the pro ranks.

Matt Kuchar (Odds: 20/1, DraftKings $10,500, FanDuel $11,300) He looked like free money last week, but he missed the cut and managed to also create controversy along the way. This week should bring a welcome fresh start.

Jason Rouslin is the lead golf analyst for Awesemo.com. He has been playing golf for the last 20 years, betting on golf for the last five and writing about golf for the last two. Connect with him on twitter @dfsgolfer23 or check him out on the @rotogrinders live golf show on Tuesday’s @ 8 PM and on the live @Awesemo_Com golf show at 9 PM Wednesdays.