How to make the mouth-watering U.S. Open lobster roll (and where to find it!) 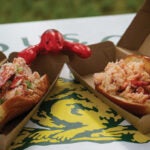 There’s one food synonymous with the New England area: lobster rolls. While roaming around The Country Club at Brookline, I came across the only lobster roll available at the 2022 U.S. Open. The Legal Sea Foods, based out of Boston, concessions off the 13th fairway are your spot for a taste of local flavor.

For $29.99, you can get a lobster roll done one of two ways, as explained by Legal Sea Foods chefs on-site:

2) Butter: Warm Maine lobster meat that bathes in butter on a toasted roll that has also been lathered and grilled in butter.

While the ingredients are minimal, it all comes down to the lobster. There’s a reason the Guinness takes better in Ireland, and lobster rolls taste better in New England. You have to go to the source if you want the best. Frankly, there’s no wrong answer. For me, I’m going with the butter option. Everything tastes better in butter, and that’s just a fact.

The price, $29.99, might feel steep, but that’s the going rate for a lobster roll at any seafood restaurant. And to Legal Sea Food’s credit, they aren’t skimping on the good stuff. They’re overflowing with lump claw and tail meat. Trust me, you won’t feel cheated.

I have one piece of advice for the Legal Sea Foods stand: Move the lobster butter basket station up front where potential customers can see and smell it. When they pull those baskets up full of fresh Maine Lobster dripping in butter, it’s irresistible. You quickly realize this is the only food worthy of your U.S. Open concession dollars.

If you’re at the U.S. Open or visiting the Boston area anytime soon, make sure to get the full experience and grab a lobster roll at The Country Club or Legal Sea Foods.