How to treat a blister so it doesn’t hurt your golf swing, according to a doctor 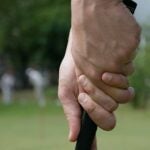 Welcome to Stuff Golfers Should Know, a new GOLF.com series in which we’re taking a departure from traditional swing instruction to impart upon you all kinds of other useful golf (and life!) wisdom that is sure to make you the smartest, savviest player in your foursome.

Sometimes the best golf stories come from those least-equipped to be telling golf stories. Case in point? The Office, whose golf-centered episode “Job Fair” has earned its place both in golf and comedic lore.

The episode follows the hilarious (if concerning) exploits of a foursome split between golfers and non-golfers. In one scene, Andy Bernard, a non-golfer, reveals his hands to the camera, which are covered in blisters after a night of pounding balls on the range.

Later in the episode, Andy says he’s filled his golf glove with vaseline in the hope it’ll dull the pain.

Andy’s ill-fated introduction to golf made for great television (and not solely for the moment he flipped off a cart and into a bunker), but it grasped (pun intended) at a central issue faced by legions of high-handicap golfers: blisters.

The painful, miniature nuisances are one of the human race’s great genetic flaws — pain and swelling formed by friction and repetitive action. These tiny irritations can cause a boatload of pain, discomfort and even infection. When they mix with a golf swing? Well, simply put, that’s not good news.

But what do you do if you’re in Andy’s position: about to play a round of golf with coworkers and clients but in too much pain to hold a club? What can you do?

The American Academy of Dermatology lists four keys to treating and dealing with blisters. They are as follows:

1. Cover the blister: As quickly as you can, cover the affected area with a bandaid or wrap, do so. Try to cover the area loosely.

2. Use padding: Cut gauze around the border of your blister, then attach it to your bandage. The gauze will help to relieve pressure, which should allow you a bit more freedom to move and grip your club without pain.

3. Don’t pop it! It’s incredibly difficult not to pop your blisters, particularly when they impede your grip on your club, but don’t do it, says Dr. Michel Schulman, a board-certified plastic surgeon in New York City.

“I know it’s really tempting to pop blisters, but you shouldn’t do it,” Schulman said on TikTok, where he regularly shares skincare wisdom. “Remember, at the bottom of the blister is really raw skin, the fluid on the inside is going to protect that area. It also has a lot of healing properties, so it’s going to help heal that. So you want to keep that fluid in there for as long as possible.”

4. Keep it clean: Let the blister drain and focus on keeping it clean, even if that means washing your hands extra in between rounds. Use some vaseline or Neosporin to keep the area from getting infected and promote faster healing.

Sure, these tips might not be an instant fix, but when it comes time to get out on the course, they’re what will allow you to survive 18 holes, no matter how nasty your wound. There’s something to be said for that.