The 5 keys to making perfect nachos, according to a golf-club chef 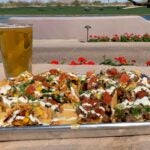 Nachos are an instant crowd-pleaser — but there are secrets to getting them right.

Ignacio Anaya Garcia was not a giant of the gridiron. He never played a down in the NFL. But when the Super Bowl gets underway on Sunday, his legacy will loom large over the game.

Known to friends as ‘Nacho,’ Anaya Garcia was a chef in the Mexico-Texas border town of Piedras Negras, where, in the early 1940s, he invented a dish that today bears his nickname. That dish became a staple of Sunday snacking, a Big Game standard.

Brian Lieske will be making plenty. As the executive chef at Grayhawk Golf Club, in Scottsdale, (just down the road from this weekend’s Waste Management Open) he oversees the menu at Quill Creek Cafe, a lively clubhouse hangout where nachos are a favorite. Lieske and his team start with fresh corn tortillas, which they fry in-house before baking them with cheddar, creating a foundation for such tempting toppings as diced tomatoes, scallions, black beans, jalapeños, roasted red peppers, sour cream and more.

Though nachos hardly qualify as haute cuisine, they shouldn’t be treated as an afterthought, either. Their preparation can be fumbled if you don’t take care. To save you from slip-ups, we asked Lieske to share his nachos playbook. Here are 5 keys for doing the dish right.

You could always do like Lieske and make your corn chips out of fresh tortillas. But that’s a lot of work — and a greasy cleanup after all that frying — and, Lieske says, it’s more effort than it’s worth for most home cooks. Better to buy chips at the supermarket. Just be sure that they aren’t thin and flimsy. “There are all different kinds, and they’re not all equally good for nachos,” says Lieske, who suggests a thicker chip as a reliably delicious delivery system. “If that chip is too thin, it’s going to break when you put all those ingredients on it. You want a sturdy chip so you can scoop all the good stuff up.”

What works for a high-flying NFL offense applies to nachos, too: arrange them in a spread formation. At Grayhawk, they bake and serve their nachos on a large metal tray, arraying them in a thin and even layer so that each gets a fair share of toppings. Piling the chips into a multi-level tower is not the way to go, either in the preparation or the presentation. “Think about when you get a big stack of nachos on a small plate,” Lieske says. “At the bottom, you get all these chips with nothing on them and that’s no good. That’s why you spread them out and top them evenly. You don’t want any naked chips.”

3. CUT YOUR TOPPINGS DOWN TO SIZE

Topping should be plentiful, but not oversize. “I have had nachos where some of the ingredients are bigger than the chips,” Lieske says. “You want them smaller, so you can fit a lot of different stuff onto your chip.” For any ingredient you scatter on top, a dice-size cut will do.

4. SPICE UP YOUR CHEESE SAUCE

In addition to oven-melted cheddar, Grayhawk’s nachos get a generous drizzle of Velveeta cheese sauce, which the kitchen kicks up with Tabasco. “It’s an old trick and it really works,” Lieske says. “Something about the vinegar and the spices in the Tabasco really heightens the cheese flavor.” It doesn’t take a lot. A dash or two should be enough. But follow your tastes. How much you add is, of course, up to you.

Topping your nachos with chicken or ground beef is a fine idea (at Grayhawk, both are offered as optional add-ons), so long as the meat is properly seasoned. Lieske favors a medley of salt, pepper, Chile powder and other Tex-Mex touches. But feel free to use whatever seasonings you favor. “You want to get a bit of spice in that meat,” Lieske says. “If you just cook it and toss it on at the end, it’s not going to taste as good as it should.”