The secret to making perfect pancakes, according to a golf-club chef 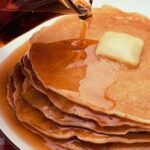 You, too, can make perfect pancakes at home.

“There are two sides to a pancake. One is brown and fluffy. The other is burnt.”

So said the former NFL coach Bill Parcells, a master of gridiron strategy but not, apparently, a great technician with a griddle.

Pancakes don’t have to be two-faced disasters. They just require some prep work and a bit of patience.

There are as many pancake batters as there are pancake lovers. But no need to get fussy. “Simple is usually better,” says Greenwald, who recommends a mixture of flour, sugar, baking powder, baking soda, eggs, buttermilk, and a touch of salt. Combine the wet and dry ingredients in separate bowls, then mix until the ingredients are all incorporated. Take care not to overdo it. A few lumps are fine. If you beat your batter into submission, you run the risk of chewy results.

You’re going to need a fat to keep the pancakes from sticking. Butter works. But Greenwald recommends a neutral oil, such as canola, so as not to interfere with the pancake flavor.

Most home cooks have had this happen: the first few pancakes don’t seem to come out right. It’s a common problem, Greenwald says, often caused by a pan that’s not hot enough. “Most people do not have the patience to let the pan fully heat to a moderate temperature.” Using a high-quality, non-stick pan helps. So does knowing when to flip. Greenwald and his crew have a pancake-making saying: wait for the bubbles and be happy with the results. “Flip too early, and you have spatter and uneven cooking,” he says. “Flip too late and the textures of both sides don’t match. Patience is a virtue for good pancakes.”

Pancakes can be as small as silver dollars or large enough to spill over the edges of your plate. It all comes down to personal preference. In his kitchen, though, seven inches in diameter is the sweet spot.

As with a golf swing, it never hurts to have a classic finish. Melted butter, maple syrup and blueberries fit that bill. But all kinds of other fruits, nuts, syrups, and compotes can work beautifully, too. If you’re mixing fruit into the batter, you’re better off with fresh than frozen, not only for flavor but for evenness of cooking. Of the many potential medleys, Greenwald says his favorite is maple bacon and chocolate chips with candied pecans.

The Pitfalls of Imprecision

Another common error is winging it with the proportions. Pancake-making is a form of baking, and in baking, Greenwald says, “every measurement counts.” Someone wrote a recipe for a reason. Follow it. The same rule of precision applies to heat. Just as you don’t want the pan too cold, you also don’t want it to be too hot. A steady, moderate temperature is what you’re after. Let things get too searing, and you’ll wind up with a burnt exterior, a la Bill Parcells, coupled with an uncooked middle, which no one likes.