The secret to making perfect mac ‘n cheese, according to a golf-club chef 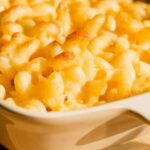 While it's hard to ruin mac 'n cheese, there are some best practices to follow to enhance this comfort-food favorite.

We’re here this week to celebrate the fundamentals, which have nothing to do with grip, posture or alignment. We’re referring, of course, to starch, salt and fat.

Those three essential food groups form the holy trinity behind macaroni-and-cheese, a comforting classic and a staple on the menu at Reynolds Lake Oconee, a luxe golf destination outside Atlanta, where Zouhair Bellout serves as executive sous chef. For experienced cooks, mac ‘n cheese is like a tap-in for a Tour pro: hard to botch. But because there’s no such thing as a gimme in the kitchen, we asked Bellout for his keys to getting the dish right.

1. No need to noodle around

Pasta comes in a range of shapes and sizes, and Bellout has tinkered around a bit. But his preference is traditional elbow macaroni. Not that you need to sweat your choice. When you boil it down, Bellout says, almost any kind of noodle will do the trick. What really matters is not the pasta size or shape but the sauce.

2. Careful not to overcook

Traditional macaroni-and-cheese is a twice-cooked dish: boiled, then baked. Take care not to take the first step too far. Boil the noodles to al dente, but no farther, and let them finish cooking in the oven. You want the noodles soft but with enough resistance that your mac-n-cheese isn’t just a bowl of mush.

3. Use good cheese, if you please

Some chefs use mornay sauce in their mac ‘n cheese. (That’s béchamel sauce blended with shredded or grated cheese, if you’re keeping score at home). At Reynolds Lake Oconee, Bellout opts instead for a reduced cream with aromatics, plus a medley of three cheeses: clothbound cheddar, good-quality gruyere and parmesan, a trio that he says “melt well together.” In the end, the choice of cheese comes down to personal taste. But Bellout says that you want a finished product that doesn’t leave “grittiness” on your tongue. “The smooth, velvety cheese we use sticks to the pasta and provide the right balance of gooeyness we’re seeking,” Bellout says. “And what is not to love about using three types of top-quality cheeses?”

4. To cover or not to cover

You can go either way during the baking process. Bellout usually goes with both: covered when the dish first goes into the oven, then uncovered toward the end to get some browning on top.

Chefs make mac ‘n cheese with all kinds of extras, from bacon and scallions to lobster and beyond. Almost anything is fair game (though Bellout stands firmly against fish). But it’s not a bad idea to base your decision on whether your mac ‘n cheese is a main dish or a side. At Reynolds Lake Oconee, where mac ‘n cheese is served mostly as an accompaniment to meaty entrees such as pork chops and steak, Bellout and his crew go without any additions. But they do offer a pair of to-go options that are meant to stand alone. Those are made with lobster and crab.