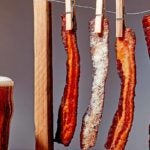 An ice-cold pint is the perfect partner for this rack of crispy bacon.

David’s Club at Omni Orlando at ChampionsGate dares to be different. This high-end sports bar, named for development partner David Mitzner, has made one of America’s most delectable morning meats — bacon — the centerpiece of a dish. And we couldn’t be more grateful.

At a spot known for its smooth bourbons and spectacular steaks, we’re here to talk about the Bacon Trio — the headliner of a drool-worthy appetizer menu. The club offers several different varieties of toppings to appease each and every one of your taste buds, including sriracha molasses, candied bacon and garlic parmesan.

You can even re-create the snack in your own kitchen. All it takes is quality thick-cut bacon, a few ingredients and plenty of love.

In short, the bacon is cooked, brushed with the coating of choice and re-roasted (see recipe below).

Its presentation is marvelous. The mouthwatering slabs are fastened by clothespins and hung on a wire stretched across a wooden frame, making the server’s march from kitchen to table one that not only engages your nostrils but turns heads along the way.

There are even studies that indicate a low-cal beer partnered with sodium might help you hydrate. So salty bacon and suds could possibly be the perfect post-round combo. Don’t argue with science.

-Preheat oven to 375 degrees.
-Lay bacon on a pan lined with parchment paper. Cover with a second pan.
-Place in oven and bake for 15 minutes.
-Transfer bacon to an oven-safe, wire baking rack on another sheet pan.
-Mix sugars and water in a saucepan and bring to boil until completely melted.
-Brush each piece of bacon on both sides with the mixture.
-Roast each side for five minutes at 350 degrees.
-Remove from oven and air-dry at room temperature for 20 minutes.

4 refreshing summer cocktails to carry along on the course

PGA Championship sleeper picks: Who we think will surprise at TPC Harding Park