The secret to baking (or smoking) a perfect ham, according to a golf-club chef 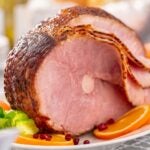 Ham is meat you can buy in a can.

It’s also a cut you can cure at home.

But in cooking, as in golf, good things come to those willing to put in the work.

As executive chef at Atlanta Athletic Club, in Georgia, Eric DaRin is no stranger to exertions in the kitchen, efforts that pay off in all kinds of bounty, including a delectable house-cured ham that plays a starring role in holiday buffets.

Stomachs rumbling, we rang up DaRin and asked him to ham-and-egg it with us: we’d pose the questions and he’d provide answers on how to cure and serve a ham, and what to do with leftovers (if you wind up with any).

The word “ham” stems from the Old English “hom,” meaning the bend of the knee. That’s a good indication of the cut you’re after: the meaty portion from the hind leg of a pig. Fresh ham is what you want, preferably bone-in. Good quality is essential. DaRin recommends going to a butcher for the best possible cut.

There are many kinds of brine. DaRin keeps his relatively simple: a base of curing salts, sugar, and water, with medley of herbs and spices, including cinnamon, cloves, peppercorns, onion, brown sugar, rosemary and thyme. Inject the brine into the meat, as close to the bone as possible, then cover the entire ham with the remaining brine and set it in the fridge to soak. DaRin’s rule of thumb is one day of brining for every two pounds of meat.

After brining, if you don’t want things too salty, soak the ham in water for a couple of hours, and then dry it off. At the club, DaRin smokes his ham to deepen the flavors, using a mix of hickory, oak and cherry pellets as his heat source. He starts at low temperature (185-200 degrees), until the ham reaches an internal temperature of 135 degrees. Then he ratchets up the heat to around 225 to get a caramelized crust.

Over the last hour to hour-and-a-half of smoking, DaRin applies a glaze every 20 to 30 minutes, his go-to is a mix of bourbon, brown sugar, and apple juice.

You could always bake your ham instead of smoking it. Use the same brining process, then roast at 325 degrees, covered in foil, until the internal temp reaches 130, then remove the foil and turn up the oven to 425 and roast until the meat reaches an internal temp of 145-150 degrees. This will also help produce a nice crust. DaRin recommends adding a bit of chicken stock and Coca-Cola to the baking pan to help keep the meat moist. During the last hour, remove foil and glaze every 20 minutes. When baking, DaRin uses a different glaze than he does in the smoker: he brushes the meat with Dijon mustard and brown sugar, along with the pan juices. Other glazes that he’s fond of include pineapple-chipotle, and Morello cherry. He has also had success with root beer and Dr. Pepper-based glazes; the sugar helps balance out the salt.

Let the ham rest for 30 minutes, then transform it into a showpiece by slicing half of it and leaving the rest whole. No need to garnish. Presented on a platter, DaRin says, your ham will make a tantalizing display.

The classics should suffice.

There are countless ways to repurpose ham. DaRin’s favorites include deviled ham salad and ham croquettes. Ham and bean (or ham and potato) soup are also superb, with stock made from the ham bone.