6 things every oyster-lover should know, according to an executive chef 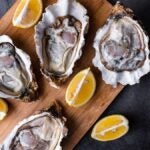 Conventional wisdom holds that you should only eat oysters in months with an ‘r.’ Well, April has an ‘r,’ and the oysters are first-rate right now at The Sea Pines Resort, where the RBC Heritage is taking place this week. In addition to the tournament host course, Harbour Town Golf Links, Sea Pines is home to a lively new restaurant called the Quarterdeck, which stands beside the property’s iconic lighthouse. The Quarterdeck has a locally driven menu, 270-degree sunset views and an oyster bar on its roof, where the oysters will still be good when May rolls around.

That’s the thing about the ‘r’ rule. It’s an oversimplification, according to Benjamin Harris, executive chef of restaurants at Sea Pines. How so?
We asked Harris for an explanation, along with other oyster-related pearls.

The Best Months for Oysters

Like the PGA Tour, oysters have a wrap-around season. Great ones are available year-round. That ‘r’ rule? It is very much applicable to wild oysters, which spawn in the summer, a stage that turns them soft and mealy, making unpleasant eating. In those warm-weather r-less months, the risk of toxins also rises in wild oysters, and, really, who wants to deal with that? But wild oysters aren’t the only oysters out there. You can also get high-quality, farmed-in-the wild oysters, raised in healthy, protected waters. These oysters are abundant off the coast of South Carolina. In months without ‘r,’ those are the oysters Harris serves.

The Best Way to Shuck an Oyster

Like swinging a golf club, oyster shucking is an acquired skill. And a lot us fall pray to fundamental flaws. “Your immediate reaction is to find where the shells meet at a point and just starting trying to crack,” Harris says. “Stop doing that. You are just cracking the shell, which will end up on that succulent meat.” Instead, place the oyster in your off hand in a folded kitchen towel with the point end facing out where the shells meet. From there, find a slit in the denser part of the shell and force the tip of your oyster knife into it. “Push a little further than you think you should,” Harris says. “Then pop.” Resist the temptation to try prying the oyster open prematurely. That will only lead to cracking. Once the oyster is open, slide your knife underneath it to scrape the muscle from the shell. It’s slurping time.

What You Can Tell about an Oyster from its Shell

You can’t judge a book by its cover. But you can figure out some things by looking at an oyster’s shell. Take East Coast oysters, which typically have a tear-drop shape with a shallow cup, and, Harris says, “a balanced, briny flavor.” On the West Coast, meanwhile, oysters often have fluted shells, deeper cups and “a creamier and fruitier flavor.” In Harris’s opinion, “the brinier, the better.” But, he adds, “I’m never one to turn down an oyster.”

While Harris prefers his oysters raw, he’s fond of any number of cooking methods. Smoked. Steamed. Pan-fried. Grilled. At the Quarterdeck, the kitchen is equipped with two charcoal ovens, imported from Spain, that crank heat up to 1,000 degrees. In those ovens, Harris and his staff roast local oysters with pecorino Romano cheese, garlic and butter, which they serve with lemon wedges. “It’s far and away my next favorite way to have an oyster,” Harris says.

How to Serve Oysters at Home

There are many ways to do it. But in the Carolina Lowcountry, oyster roasts are a rich tradition. The essential tools are a large fire or charcoal pit, with a large piece of cast-iron steel on top and a wet burlap sack. Simply heat the steel, Harris says, then toss your oysters on the burlap and “watch them roast and steam.” Cooking time is about two minutes. A bushel of oysters (that’s roughly 100 oysters) will feed six to seven people, Harris says.

Best Garnishes for an Oyster

The world is your oyster. No need to fuss it up. Harris recommends keeping it simple. “I start with naked,” he says, “and then switch back and forth between lemon, mignonette and horseradish.”