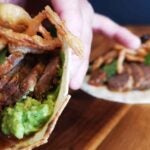 It's possible to make restaurant-quality tacos at home.

Tacos are like birdies: no one knows who made the first, but the fact that they exist is a very good thing.

At Rancho San Lucas, a new luxury development in Cabo San Lucas, birdies can be recorded on a Greg Norman-designed championship layout, and tacos can be had in the clubhouse and at two on-course comfort stations. The property’s signature variety is the brisket taco, featuring dry-rubbed, slow-cooked beef, served on a fresh corn or flour tortilla with guacamole, salsa and onions fried in a beer-tempura batter. But here’s another way that tacos are like birdies: you can make them in all kinds of ways, so long as you abide by a few basics. Here are 5 taco fundamentals, according to Rancho San Lucas chef Matias Forte.

1. Be picky about your proteins

When you’re talking tacos, “it all comes down to the quality of the protein,” Forte says. Whether it’s beef, fish, chicken or something else, go with the highest grade ingredients you can find, and season them simply to let their flavors shine.

At Rancho San Lucas, the brisket tacos come with assorted house-made salsas of varying spiciness. Though there are boundless styles of store-bought salsas, there’s no substitute for making them yourself. “They are the magic ingredient that have the power to turn a good taco into a great one,” Forte says.

Whether in a pan, on a flat top or over an open flame, plan on warming the tortillas just prior to assembling the tacos to “accentuate the flavors and aromas,” Forte says.  That’s the general rule, but there are exceptions, such as with flautas and hard-shell tacos dorados, where the filling is put into cold tortillas, rolled up and fried.

4. Have an assembly plan

At most traditional taco stands, the protein goes into the tortillas first, followed by salsas and other garnishes. But that’s not a hard-fast rule, Forte says. In some cases, other ingredients, such as guacamole, salsa, onions and the like, go in before the protein. These more elaborate presentations are more common, Forte says, at contemporary Mexican restaurants.

5. Match the tortilla to the taco type

Corn and flour tortillas are your two main choices. The former are made with corn, salt and water, the latter with wheat flour, salt, water and lard. While it’s fair game to mix and match them, Forte says that corn tortillas are generally best with fatty and stewed proteins (beef tongue tacos, anyone?), while flour tortillas tortillas “are fantastic with braised, grilled and buttered proteins,” including carnitas and tacos.