Nobody is drawn to the word brand but this is an age of marketing and even infant clothing is a branding opportunity. Good luck finding a golf shirt that isn’t selling something.

David Stern’s death on Sunday at age 77 was an invitation to compare how the NBA brands itself and how the PGA Tour does it. What they share is that they are both sports.

News
Tour Confidential: How could PGA Tour telecasts be better?

Just about every prominent American golfer these days grew up with basketball dreams. Tiger was never in awe in the presence of Arnold Palmer or Bill Clinton. But with Michael Jordan he was different, at least he was through 2009. Around His Airness, Tiger was always leaning in (whatever that means). He wanted what Jordan had. Now he’s every bit the brand that Jordan is. Tiger’s killing Michael on Twitter, 6.5 million followers to 3.8 million.

The high purpose of Twitter and the others is to sell. You start by selling and branding your life and showing your high-school classmates that yours is better than theirs. Rickie Fowler and Jordan Spieth used to own that category, what with all their disposable income and offseason easy-living fun. But now they are husbands first and their beach-bum days are in the rearview mirrors of their souped-up golf carts. They’re still likable, but now they have to sell something other than endless summers. You can only sell one version of yourself at a time. You settle on something, then you run with it. You can’t sell eat and pray and love. It’s too confusing.

None of this is original. This is from reading the life and times of David Stern, the marketing genius who turned the NBA into a star-driven brand in his 30 years as its commissioner. Without the benefit of social media!

The starting point to Stern’s success, as a young NBA executive in the early 1980s, was convincing the public that the NBA was not, despite its reputation at the time, a league fueled by lines of coke. That stigma, whether it was fair or not, made the league a tough sell to middle America. Stern convinced the Players Association to accept drug testing and that was a first step to its modern success. The NBA became both urban and suburban and that combo platter created a stage where Larry Bird and Magic Johnson could shine. They paved the way for Michael Jordan. Jordan begat Kobe, KG, LeBron. No surnames necessary.

The PGA Tour can’t match those names for cultural sporting impact, but golf’s done just fine. Since the end of World War II, men’s professional golf has had four Michael Jordans: Ben Hogan, Arnold Palmer, Jack Nicklaus and Tiger Woods. That’s it. For your league to truly flourish, you need that kind of star power. After Tiger’s 2018 and ’19, what’s obvious now is that he, like Arnold before him, will never clear the stage. He’s going to stay fit, handsome, relevant, involved. But hanging is not the same as winning and you can’t manufacture stars. You really can’t.

I once heard Ray Floyd refer to himself as a superstar. Raymond was one of the great talents to ever play the game. But he was not a superstar. Bring Raymundo to the Apple store on PGA Boulevard in Palm Beach Gardens and see what happens.

The PGA Tour, like the NBA and every major sport with massive TV contracts, has to sell two things. You have to sell your sport first and your stars second. First the base, then the blush. Adam Silver, Stern’s successor, signed off on the movie Uncut Gems, with Kevin Garnett and Adam Sandler. It’s incredible. KG thinks he needs a particular valuable stone, which Sandler’s character owns, in order to perform. Sandler’s character is married to the mob in more ways than one. And this is dangerous territory for the NBA, in more ways than one. This movie is right on the edge, because basketball is so easily derailed by point-shaving and outside influences. But Silver rolled the dice and the Safdie brothers directed the guts out of this story.

What film could golf produce that would be even close to edgy like that? (And would it want to?) Closeted gay Tour star pretends to lead heterosexual family life for sake of Tour, sponsors, parents, then decides to chuck it all with stirring victory comments at Players Championship. Hard pass. 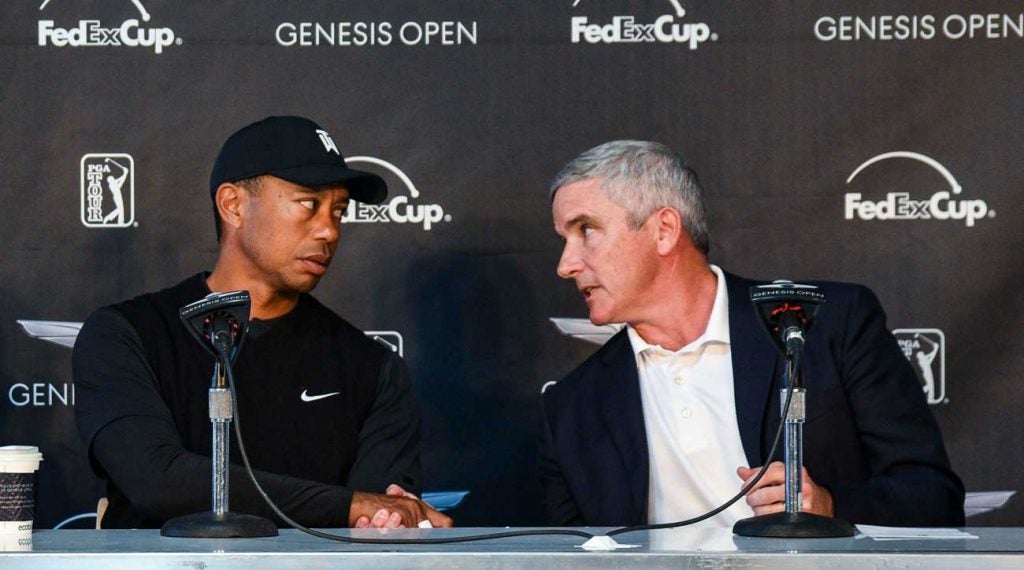 Jay Monahan, the Tour commissioner and a man steeped in the culture of sports, had to be shaped by David Stern. Safe words because all modern American sports executives have been shaped by David Stern. As Stern took decisive action circa 1980, Monahan must do the same today. It would seem unlikely that the PGA Tour has a drug problem. It likely has the same level of drug abuse and alcohol abuse as in the general population. But I fear that it is right on the edge of the one fundamental thing that makes golf golf. Insert your own version of James Carville to Bill Clinton here, but it’s the rule book.

Nobody cares and nobody believes that these guys are good. They’re just guys. What we need to know is that they know how to keep an honest scorecard. I am a broken record on the subject. (Not a marketing line for the LP’s continued comeback.) But the rules are the foundation for everything else. Our faith in the game, in what we watch in person and on TV and via various Twitter feeds, starts with our belief in the scores. The players in terms of how they interact with one another, the same. Without that faith, Golf Channel is just guys walking over-fertilized earth in cheap
polyester shirts that sell for $80 in a pro shop near you.

The worst thing about the Patrick Reed situation in the Bahamas is that he improved his lie with his practice swings, and that’s wrong on every level there is. The second-worst thing is that he was not embarrassed by being caught. He was defensive, and what he said in his own defense made no sense. The third-worst thing was that his teammates the following week at the Presidents Cup in Australia had to pretend it was no big deal. Or maybe that’s what they actually think.

Recentish rule book changes have not helped. Nobody liked the idea of couch potatoes calling in rules violations, because it sounds weird. “I don’t call in when Kobe travels,” Woods said a few weeks after the 2013 Masters. An amusing line, a widely-shared view — and a huge point-misser. In the NBA, the culture really is catch-me-if-you-can. GOLF IS SUPPOSED TO BE THE OPPOSITE. A good place for golf not to follow the James Naismith and Co.

The reason golf, until recently, let everyone be a witness is to help ensure accurate accounting. As Ronald Reagan used to say, Trust but verify. Golf took too much from other sports by killing that bit of oddness. It actually showed an actual lack of understanding of the game’s own core values, which fly in the face of where modern culture is going.

Woods had a run of bad rules issues in 2013. No need to review all that now and nobody wants to hear about it anyhow. But his influence is immense. The single-best thing that Tiger could do today for the PGA Tour is to stand up, as Tom Watson, Jack Nicklaus, Arnold Palmer and Bobby Jones did, for the sanctity of the rule book. I’d love to know what he really thinks about what Reed did in his tournament. I’d like to know what any of the fellas really think. Had the Americans lost the Presidents Cup, we might have actually found out. But winning takes care of everything. That is, it papers over everything.

This subject and this time is Jay Monahan’s David Stern subject and time, circa 1980. What he has to do, as the professional game’s leader, is convince the players that the whole thing will come tumbling down without total fidelity to the rule book.

Imagine two 90-shooters playing a nine-hole after-work match. Cassandra moves sand behind her ball to improve her lie. Suzie sees it. Suzie would never look at Cassandra the same. Reed was playing on TV against many of the best players in the world.

Some of the most well-read stories on this website have the word rules in the headline. There are a variety of reasons for that. Golfers like to learn something new. But our readers also know that rules debacles reveal character. My colleague Dylan Dethier put together a year-end story that ran under the headline, “Golf’s 5 biggest rules controversies of 2019, ranked!” It got read.

These lists — on Twitter, on websites, most everywhere — often end in a multiple of five. (Thanks, Dave. D. Letterman. The man who made the top-10 list part of late-night culture. Lucas Glover, after winning the U.S. Open, on Late Night, No. 10: “I’d like to thank Tiger Woods for letting someone else win.”) If there was room for six on Dylan’s list, I would have suggested adding this one, from the Honda in March.

Adam Schenk was given two shots on Saturday for breaking a rule in the second round. His caddie stood behind him as he played from a trap, violating Rule 10.2b(4). Schenk didn’t know. He certainly wasn’t trying to cheat. Doesn’t matter. He broke a rule. Was Schenk happy? Of course not. But this is what he said: “The rule changes are what they are. They’re fine. Everybody has got to play by them, and I just unfortunately didn’t.”

Kid finished 90th on the money list. (Yes, the money list.) Happy for him. I’d take his year over Reed’s in a Ponte Vedra minute. I wonder what David Stern would do today if he were handed the reins to golf. My guess is he would have a meeting of the minds with Tiger Woods.