Tour Confidential: How could PGA Tour telecasts be better? 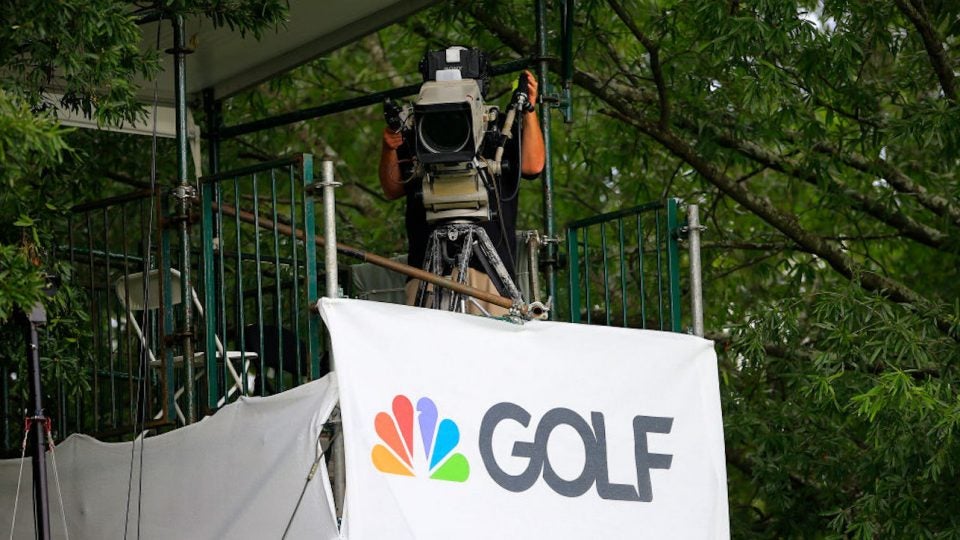 Check in every week for the unfiltered opinions of our writers and editors as they break down the hottest topics in the sport, and join the conversation by tweeting us @golf_com. This week we discuss the PGA Tour’s looming television rights deal, second-hand golf purchases, and Tiger’s health…

According to John Ourand of Sports Business Journal, CBS and NBC have agreed to “broad terms of new deals” for long-term TV rights to continue to broadcast PGA Tour events. The Tour will reportedly receive $700 million per year, up from $400 million. In assessing how the networks currently cover the Tour, where do their telecasts have the most room for improvement?

Luke Kerr-Dineen, instruction editor (@LukeKerrDineen): Of course I’m going to say this, but I genuinely think there’s room for more instruction in the current broadcasts. Golf right now is being covered like so many other sports, and it’s great at it. But the industry would do well to remind itself that golf is more participatory than every other mainstream sport. The people who watch the most golf are the same ones that play it the most. Viewers aren’t rooting for a team; they’re watching because they love golf, and want to see the same game they play on the weekends being performed at the highest level. So let’s take the opportunity to educate; to break down the action in innovative and explanatory ways. Help deepen golfers’ knowledge, and explain the underlying principles for newcomers who may be tuning in, and it’s better for everyone.

Michael Bamberger, senior writer: The tournament coverage does not do nearly enough to get the viewer interested in the lives of the players. We know their swings and where they stand in the FedEx rankings but we know very little about their lives. If we did, we’d be more connected to the tournaments in which they play.

Sean Zak, senior editor (@Sean_Zak): The best content is ALWAYS player-caddie conversations. Each Saturday and Sunday round should have two players and their caddies mic’d up. Make it a Tour rule. We might learn a lot about Dustin and AJ Johnson. Or Harry Diamond, who says so little. That is a gigantic missed opportunity for context just staring us in the face.

Jonathan Wall, equipment editor (@jonathanrwall): I’m with Sean. The Tour should steal a page from the NBA and NFL and mic players and caddies up on a regular basis. The coverage hasn’t changed all that much in the last decade, and while I think shot tracer has improved the products, it took too long to implement. Viewers tune in to get coverage that’s compelling and worth their time. Taking a closer look at the player-caddie relationship and how they handle shots during crunch time is beyond necessary. It should’ve been added years ago.

Are you surprised the Tour didn’t formulate a more radical plan, like start its own network?

LKD: No. The PGA Tour is making a smarter, savvier choice. Rather than assuming all the overhead of spinning up a new network in an increasingly saturated market, they’re outsourcing their operation for a king’s ransom. After all, why leave all that money on the table in pursuit of a high-stakes that might not work? Instead,  between NBC, CBS, and whoever wins their streaming rights (either GOLFTV or ESPN, by all accounts), the tour can shape the perception of the product across three different platforms with minimal risk.

Bamberger: Two words you seldom see in the same sentence are golf and radical. No, not surprised at all. The golf method is to tweak what is working.

Zak: Not very surprised, though PGA Tour Live is sort of always in place, and I see it taking up the same role as NBATV: occasionally great matchups take place there, but largely it’s for the diehards. Leave the remaining rounds for the common, visiting fan.

Wall: Not really. It’s a massive undertaking and I’m not sure the Tour wants to dedicate the financial resources — yet. With a new Tour headquarters in the works, there had to be talks about having the space to expand if things were ever brought in house. I wouldn’t be if Monahan and crew go for it after the next television contract expires. 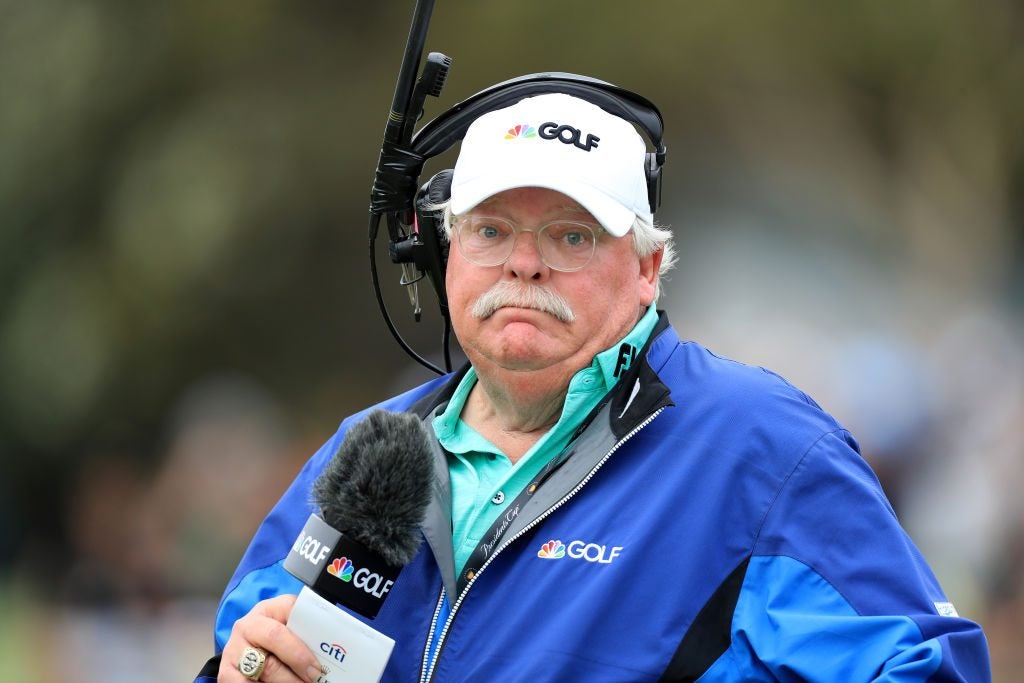 Fred Couples, who was an assistant captain at the President Cup, said Tiger Woods benched himself on the third day of the matches because his body was spent. Tiger, who turns 44 next week, had nothing short of a remarkable 2019, but what’s your read on his physical state as we enter a new calendar year?

LKD: I have no real read on his physical state, apart from being perpetually skeptical, which I think is pretty normal at this point. Tiger seems to wear down remarkably quickly. He was exhausted towards the latter-part of 2018, which his Tour Championship win masked-over somewhat (remember all those stories of his swing speed slowing down?). This year there were constant stories of him feeling exhausted following his Masters win that persisted throughout the final three majors of the year. This doesn’t mean he’s going to get injured again soon — nothing of the sort — but it’s a constant reminder of Tiger’s new reality.

Bamberger: I’m sure what Fred said was accurate, but it likely goes deeper than that: it takes Tiger at least three hours to get ready for a round of golf, and a week to recover from a tournament. How often do you want to do that? I think Tiger’s fine in 2020–for about eight events, tops. He’ll be at  eight others in body but not in spirit.

Zak: At this point, I don’t expect Tiger to play a lot of high intensity golf three straight weeks. Considering all his duties in Australia, it’s not shocking he didn’t feel up to it. He’ll pace out his schedule per usual this year, which really just means my answer for his physcial state is “check-check-check.” All seems normal.

Wall: I don’t think he’ll play just the majors, but my expectation is to see Tiger at fewer events in 2020. I figure he’ll play at least one event in the weeks leading up to each major, and then add a few WGC’s and some of his usual stops to keep it under 15 starts. Given his injury history and the time it takes to get his body ready before each round, playing 15 is a full load.

Since we’re on the topic, will Tiger win a major next year?

LKD: I don’t think so, but I hope I’m wrong. I mean, would it really surprise you if he picked up another Masters win?

Bamberger: No. Which means he will. I suppose the Open. You know which one.

Zak: The odds are he will not, and I’ll take those odds. Augusta, he’ll have a solid shot, sure. Harding Park should be chilly and tight, so no. Winged Foot is intriguing, but a toss-up for the entire field. Like Bamberger, I like his chances best at Royal St. George’s, where he’ll be one of the smartest players in the field. There’s four degrees of latitude difference between Kent and Portrush, and about 8-10 degrees temperature difference in July. It could be as tame as Carnoustie was in 2018.

Wall: Yep, he’ll pick up No. 16 at the Open Championship. Still believe he has two majors left in the tank. 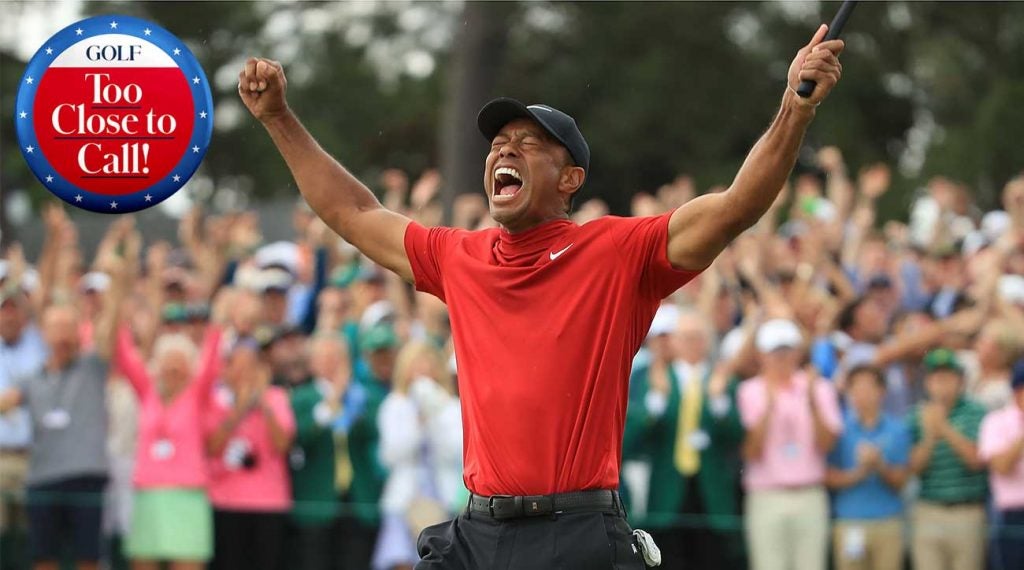 What player — or storyline — was most under-appreciated or underrated by golf fans in 2019?

LKD: Tiger Woods winning the Masters. I know it’s been covered to the hilt, but let’s never forget that, even just a few years ago, this was a guy who looked more likely to retire than ever play in a major again. A guy who’s only goal was trying to live without pain in his day-to-day life, and whose off-course problems seemed to be rearing its head once again. And now, he’s got another green jacket in the closet.

Bamberger: An Irishman (southern division) winning a British Open in Ireland (northern division). Portrush has to be the most spectacular Open courses ever, alongside Turnberry, and Shane Lowery has to be one of the likable Open winners ever, alongside Tony Lema. Maybe he’ll make the European Ryder Cup team next year. Either way, he’s in the pantheon for the rest of his life.

Zak: *Eyeroll at LKD*. Tiger winning the Masters is exactly why we’re asking this question! Who did he keep us from paying attention to? The answer is either Jin Young Ko and her two majors (and breaking a Tiger record) or 21-year-old Hinako Shibuno winning the Women’s British Open in her first LPGA start. Imagine if Viktor Hovland won the U.S. Open at Pebble Beach? We’d lose our minds about that.

Wall: I’ll say Brendon Todd returning from golf’s abyss (not to mention full-swing yips) to nearly when three straight PGA Tour titles. In an age where just winning on the Tour in this ultra-competitive environment is considered a major accomplishment, Todd looked like a world-beater and was in the late conversation for a spot on the Presidents Cup team. Brendon. Todd. I blame the lack of interest on football and basketball going on at the same time.

Our Josh Berhow recently stumbled upon a flea-market putter with quite backstory. What’s the coolest golfy item you’ve purchased on the secondary market?

LKD: In 9th grade I bought a Scotty Cameron Del Mar 3.5 Pro Platinum. It’s deliciously impractical, but probably the most beautiful putter ever made. It was so beaten up that I got it for $85. I sent it to get refurbished from Scotty Cameron’s restoration service and it came back good as new. Better, even. I used it throughout high school, and even in its retirement, it’s never far away. Today, it’s an arms-length from my desk in the GOLF offices.

Bamberger: Josh Berhow’s story about his flea-market putter was one of the most enjoyable things I have read since Josh Berhow wrote the necessarily incomplete history of the warning sign at Bethpage Black earlier this year. Like Josh, I also bought a Bullseye putter in an unlikely place, from a surfer in a gas station not far from Pebble Beach. I used that putter poorly for years, from both the left and the right. (Mine was a two-way model; Josh’s was not.) As the most commonly found ball in a water hazard is a Pinnacle, the most commonly found “yard-sale” putter is the Bullseye.

Zak: My grandfather snagged a set of Wilson irons from the 1930s from a secondhand store, and they’ve been passed down to me. The 7-iron is being crafted into a coat rack. The 2-iron, well, we’re hoping to hit that soon.

Wall: It has to be a set of Titleist 731PM irons. As a fellow lefty, I have to give Phil Mickelson credit for creating something for the southpaws. The set was ahead of its time with cavity-back long irons and muscleback mid and scoring irons. I used the irons for years until they basically fell apart. When my game is on the skids, I consider searching for a fresh set and turning back the clock. Come to think of it…

Anyone think they could hit this thing? Wilson Johnny Revolta 2-iron from the 30s pic.twitter.com/CDYTFUKraQ 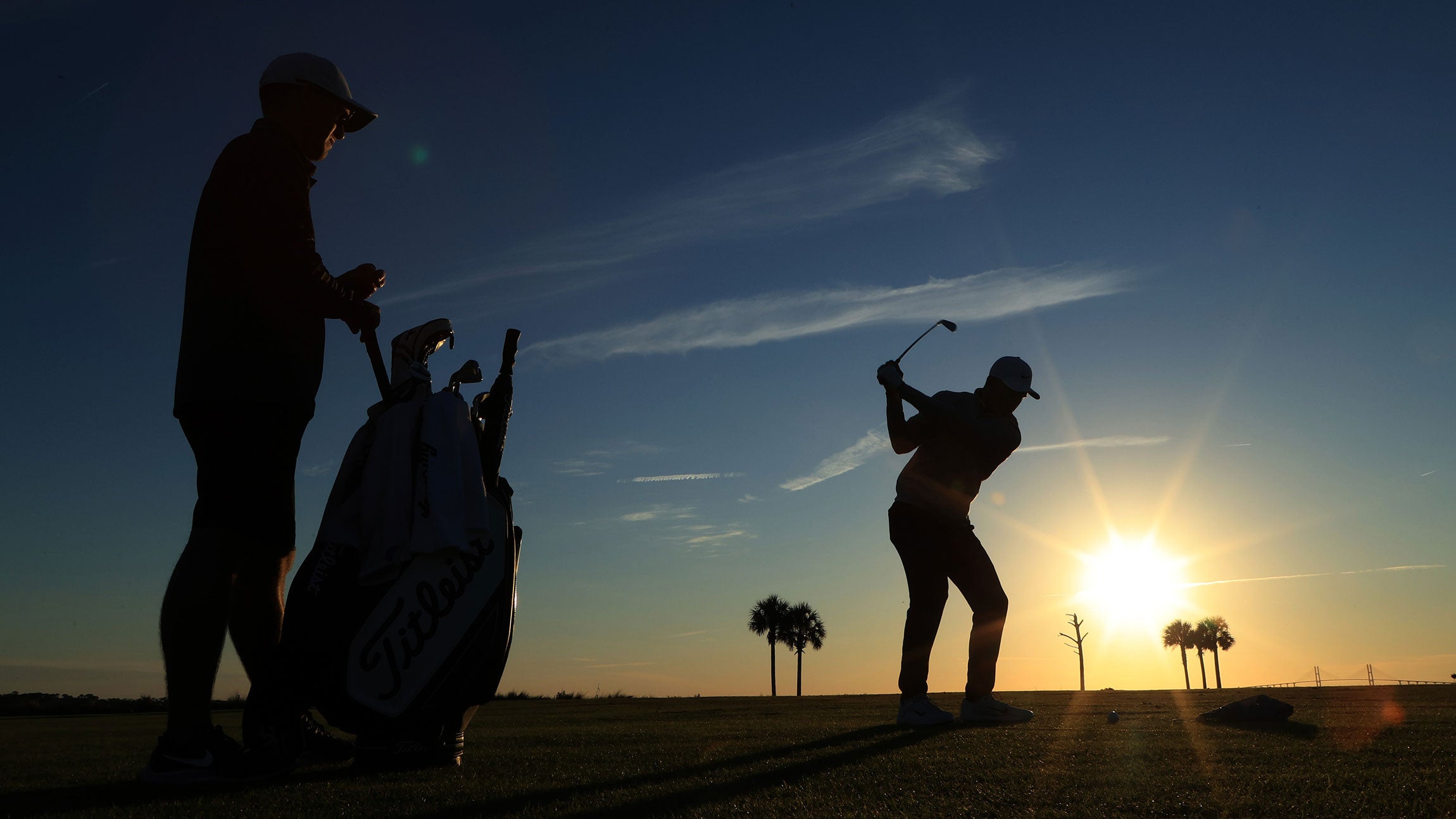 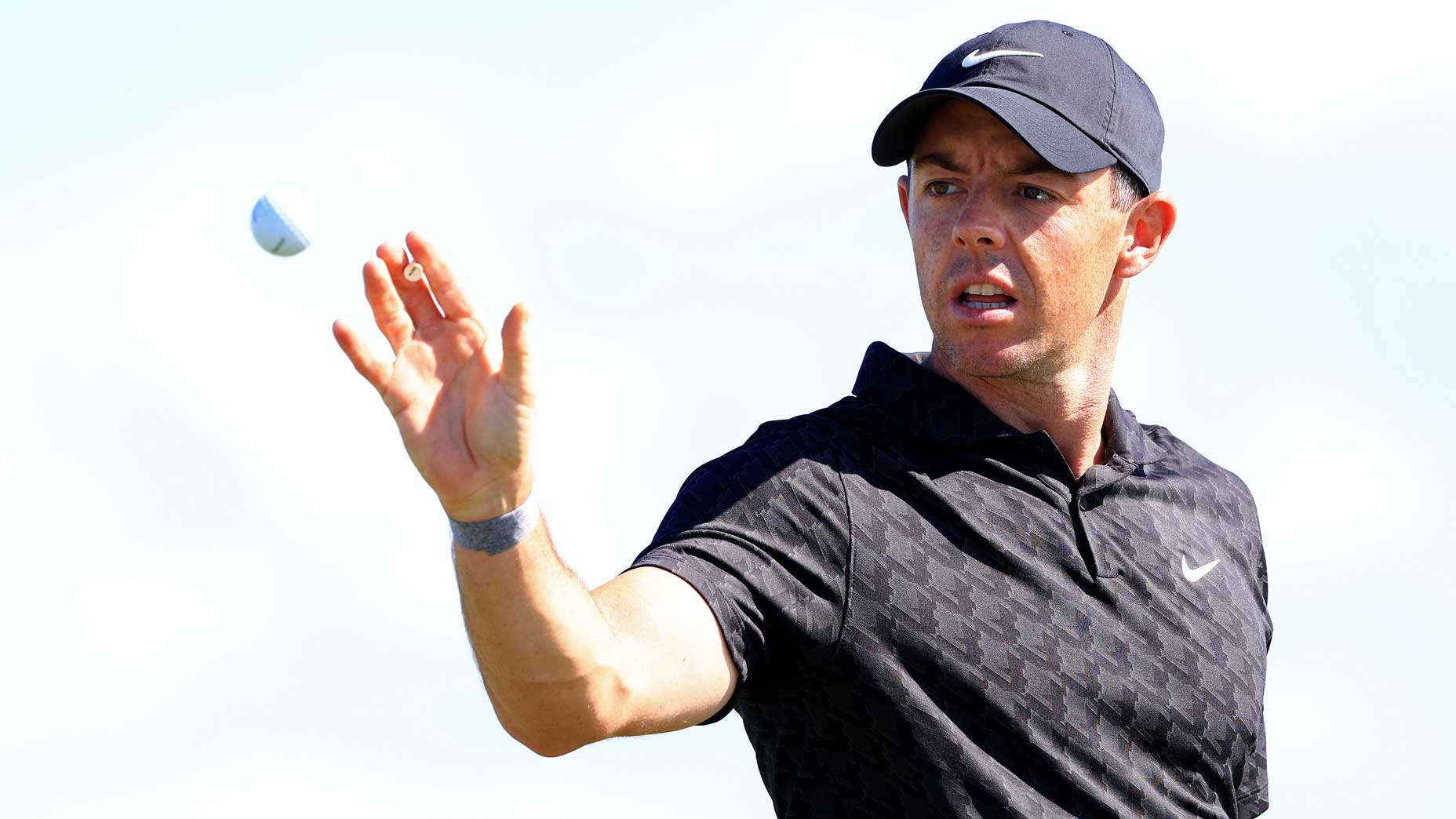 Confused about rival leagues to the PGA Tour? The players are, too
Go to mobile version