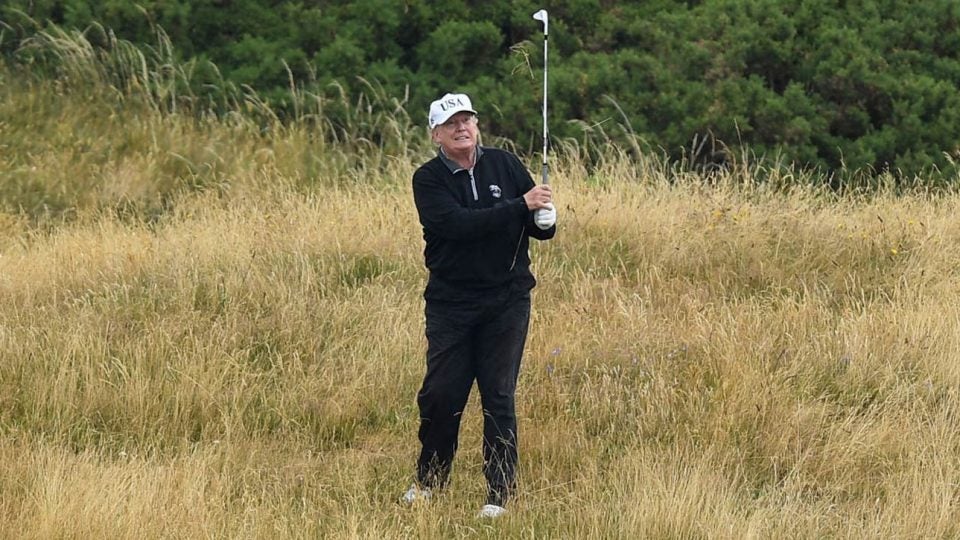 President Donald Trump is at the center of the Mueller Report.
Getty Images

Special Counsel Robert Mueller’s report on his investigation into Russian meddling in the 2016 presidential election is out, and the political world is ablaze over what the report may or may not mention about President Donald Trump.

But even us in the golf world couldn’t help but look at the report and see if our favorite sport was mentioned within the 448-page document. After doing the old-fashioned search option of “Command + F” on the MacBook (or “Control + F” for those on a PC), we found that golf was mentioned SIX times in the report.

In honor of President Trump’s love of golf, here’s every time the word “golf” was mentioned in the Mueller report.

1. On page 292 under the section titled “The President Asserts that the Special Counsel has Conflicts of Interest”, we found out that the special counsel once belonged to Trump National Golf Club outside of Washington, D.C. And that Trump found it to be an issue with regards to Mueller being able to do his job:

“The President cited as conflicts that Mueller had interviewed for the FBI Director position shortly before being appointed as Special Counsel, that he had worked for a law firm that represented people affiliated with the President, and that Mueller had disputed certain fees relating to his membership in a Trump golf course in Northern Virginia.”

2/3. Scroll a few lines down on the same page, and we learn that Mueller ended his membership at the club in 2011 after 17 years. He also wanted some of his money back:

“In October 2011, Mueller resigned his family’s membership from Trump National Golf Club in Sterling, Virginia, in a letter that noted that ‘we live in the District and find that we are unable to make full use of the Club’ and that inquired ‘whether we would be entitled to a refund of a portion of our initial membership fee,’ which was paid in 1994. 10/12/11 Letter, Muellers to Trump National Golf Club.”

News
Rick Reilly on his round with Trump, and why Trump’s cheating is about more than just golf

4. Jump to the next page on page 293, and we learn that former White House adviser Steve Bannon told Trump that it was not worth trying to make the case that the special counsel had a conflict of interest:

“And Bannon told the President that the golf course dispute did not rise to the level of a conflict and claiming one was ‘ridiculous and petty.’ The President did not respond when Bannon pushed back on the stated conflicts of interest.”

5. Golf is then mentioned again in the citations at the bottom of page 293:

“10/27/11 Letter, Muellers to Trump National Golf Club. The Muellers have not had further contact with the club.”

6. Last, but not least, our beloved game makes one final appearance in the report in a written response given by Trump to the special counsel’s questions. When asked if he spent time at Trump Tower in New York between the days of June 6th and June 9th in 2016, the 45th president mentioned that he had been at his course in Westchester County, New York giving a speech on June 7th:

“For example, I am aware that my June 7, 2016 victory remarks at the Trump National Golf Club in Briarcliff Manor, New York, were recorded and published by the media.”