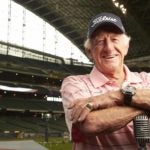 The Brewers’ loopy booth announcer, Major League scene-stealer and former big-leaguer has made an art of swinging and missing. So why would golf be different?

Back when I was playing pro baseball. It was pretty frustrating at first. The ball’s sitting up on a tee, but I’d hit it out of bounds, or hook it, or hit a grounder. It’s not like you’ve got some guy throwing a pitch 100 miles an hour at you.

Maybe! People screaming obscenities about me and my family, like when I was catching!

Are you any good at golf?

I could put a stick of dynamite in my driver and still only hit it 200 yards.

You finished your career with a .200 batting average.Are you a little relieved you didn’t get one more at bat?

I never paid much attention to that stuff. I did manage to hit 14 home runs in my career, though, and a couple of them were off Hall of Famers. When I see Sandy Koufax now, I always apologize to him, because I thought that might keep him out of the Hall of Fame.

You ad-libbed your lines in the movie Major League, right?

Yeah, the director told me, “Say whatever you want to say; use your own stuff.” So things like “Juuust a bit outside” were off the cuff. “Ball eight,” “Ball nine” — all of that stuff.

Could Charlie Sheen really bring the heat as the Wild Thing?

Charlie was good! All I had to do was watch him wind up and I knew. He could really throw!

Not a lot of people can say they’ve also been choked by Andre the Giant in their career.

Yeah, while I was announcing Wrestlemania. That guy scared the crap out of me. He did that on his own. He was just supposed to rant and rave and talk about Hulk Hogan, and then all of a sudden he started choking me! It was fun — I guess.

You’ve been the voice of the Milwaukee Brewers forever. How strange was it for opening day to come and go this year without baseball?

This is going to be my 50th year with the Brewers, and my 65th year overall in baseball. It’s what I do. It’s where I’m supposed to be. So it’s sad.

What do you think will happen this season?

We’re going to eventually start up again, but it will probably be without people in the stands. Now, I don’t care if you’re a baseball player or Tiger Woods, players feed off of the adrenaline of the fans. To think about playing baseball in an empty stadium, it just doesn’t seem right to me.

Well, hopefully we’ll get baseball back soon and we’ll see you back in the booth.