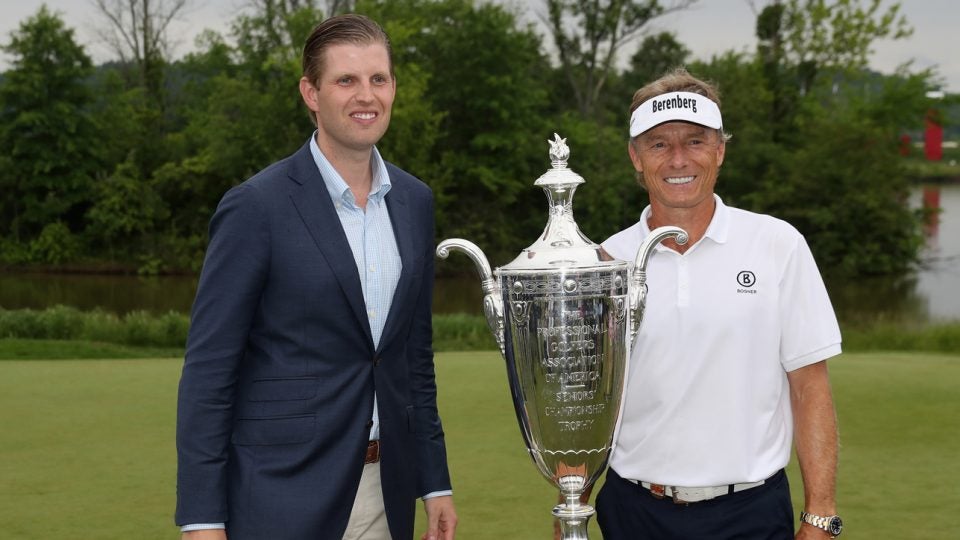 STERLING, Va. – The only golf that really mattered was being played in the final twosome, as Vijay Singh and Bernhard Langer traipsed along the soft, damp fairways of Trump National on Sunday, trying to claim the oldest and tallest trophy in senior golf, the one you get for winning the Senior PGA Championship.

You know these men, stalwarts of the U.S. golf scene for several decades now but still bearing the accents of their homelands, Fiji and Germany. Two more foreign-born golfers in a long line of them, drawn to the rich promise of golf in America, marching in the parade that started with Donald Ross and Tommy Armour and continues to this day with Jon Rahm and Hideki Matsuyama and a long line of others.

The Big Fijian yipped his way to second place, and Langer, the German golfing machine, won for the second straight week. Langer is 59, and his play on the senior tour, with 32 victories, is way north of impressive. Both men—fellow Hall of Famers and Masters champions and Floridians—walked by Eric and Donald Trump Jr. as they made their way to a temporary scoring tent beside the 18th green, the shield of Trump Golf above them.

Eric and Donald’s father, as president, has been wearing out the phrase “America first,” but he knows what every American golf fan knows, that the game in this country would be far less interesting without its émigrés. In victory, Langer noted that “it’s great to see that the whole world now plays golf. They play golf in China, in Russia, in communist countries where golf was never played. What used to be East Germany years ago. We see some great talents coming out of Korea and China and the Near East and Far East, from all over the globe.”

And when these global golfers get really good they invariably want to do the same thing, win the best events golf in America has to offer, including the Masters and the U.S. Women’s Open and the Senior PGA Championship. Since 2012, the Senior PGA has been won by an Englishman (Roger Chapman), a Japanese golfer (Koki Idoki), twice by a Scot (Colin Montgomerie), an American (Rocco Mediate) and now a German. 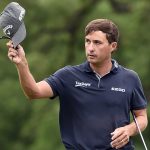 The 2017 edition was an interesting event, and maybe it was for the best that President Trump never popped in, as some expected he might. The Trump name was ubiquitous, of course. You walked over it on the doormats in front of the caddie headquarters, the media center, the clubhouse. In the temporary pro shop, the name was on belts and hats and headcovers. But the name didn’t seem political in the context of the event. It seemed like what it’s been for decades, a term of marketing.

Loren Roberts was in the pro shop after he had played his 72 holes, buying Trump this and Trump that, and one of the young assistant pros said, “We’re going to bring down a lot less merchandise than we brought up.” Eric Trump, the second son and the man running the Trump golf empire in his father’s absence, was everywhere, friendly, engaging, talking about Trump courses near and far. When the event was over, he drove his older brother up the steep hill from the home green to the clubhouse in a golf cart. Ahead of them was a cart carrying the impossibly hefty Alfred S. Bourne Trophy. Behind them was a cart carrying three members of the Secret Service.

So, no, it wasn’t just another golf tournament. It was the first major held on a U.S. course owned by the Trump family, with another coming in July, the U.S. Women’s Open at Trump Bedminster. A small group of damp protestors congregated near the entrance to the private course, right on edge of where suburban D.C. meets semi-rural Virginia. When John Daly nearly holed an eagle pitch, a fan yelled lustily, “Attaboy, hoss.” Not a word you commonly hear inside the Beltway.

Inside the clubhouse, naturally, things were much more refined, even if Miguel Angel Jimenez told his girlfriend he would whistle for her when he was done in the locker room. It was a Trump clubhouse like many Trump clubhouses, like ones you see in in Florida and New Jersey and California and New York, with the same swing-sequence photographs of Arnold Palmer and Sam Snead and Ben Hogan. The clubhouse here has the same dark brown lockers you see elsewhere, one stamped with a gold-plated No. 1, reserved for the course owner, Donald J. Trump. Through massive picture windows, you could see a common sight at Trump golf properties, an impeccably groomed course. The clubhouse paintings ran the gamut from Victorian ladies carrying parasols to Victorian gents wearing bowlers at a rakish angle.

But there was one spectacular piece of artwork that caused Tom Lehman to stop dead in his tracks. It displayed the Gettysburg Address in French, German, Greek, Hebrew, Japanese, Latin, Russian and, and in a reproduction of Lincoln’s own hand, English. “You have to spend some time with it, to make out all the words in Lincoln’s handwriting,” Lehman said.  ”But it’s worth it.”

The clubhouse, of course, sits high on a hill. Below Lehman, on the banks of the Potomac, a golfer from Fiji and a golfer from Germany battled it out, looking to swell their U.S. bank accounts and show the rest of us, wherever we may be from, how it is done.