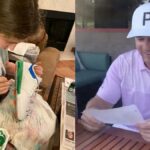 Call me a softy for a nice feel-good story for good people doing good things during this crazy time, but this little item brought a smile to my face this morning when good news has never been more welcome.

Katharine Koonce is a teenager who suffered a terrible accident when she was just four years old. She received second- and third-degree burns on more than 75 percent of her body. She was admitted to three different Shriners Hospitals for Children over the course of her treatment, where she received “more surgeries than she can count,” but is happy to report that she’s been thriving ever since and has become a Shriners patient ambassador.

And so, ahead of the Shriners Hospital for Children Open, Katharine decided to paint a pair of Puma shoes for Bryson DeChambeau, who is making his first start following his U.S. Open victory. The shoes were adorned with green and blue, and even featured a few math equations painted on them.

“That’s deriving acceleration from velocity,” Bryson says at one point in the video below, reading her work. “You did a good job on that.”

Bryson wore the shoes during his first round, where he raced into the overnight lead, and plans to auction them off for charity after the event.

Zozo Championship expert picks: Who our staff thinks will win