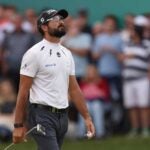 Francesco Laporta on Saturday during the third round of the BMW PGA Championship.

A hoodie it is not.

That much we know. Last year in this space, as we checked under the hood to look at just how Tyrrell Hatton won the BMW PGA Championship, we also checked out his hoodie. During Thursday’s first round, at venerable Wentworth Golf Club just outside of London, Hatton wore a blue one. On Friday, a black one. On Saturday, a white one. And on Sunday’s final day, a blue one again. And for folks across Twitter, he was either revolutionizing golf fashion. Or wrecking it.

“Dear Golf, it’s 2020 not 1920,” tweeted GOLF Top 100 Teacher Jonathan Yarwood. “Yes, that’s a hoodie and it’s a modern item of clothing that is worn by a younger demographic. A demographic you need to attract in order to grow and survive. it’s progress. You can’t afford to be exclusive any more, be inclusive. Embrace change.”

Only to be responded to in this fashion (no pun intended):

“I fail to see why this is about attracting younger people to golf?” tweeted @johnjpu. “I have yet to see any evidence that relaxing any type of dress codes has encouraged new members to the game. Do you really think anyone is sat at home saying “right I’m off to learn golf now I can wear a  hoodie “?”

On and on it went. To which this year’s BMW leader, Francesco Laporta, says:

On Saturday, Laporta wore a white shirt from Hydrogen sportswear. Without a collar. With a black skull in the middle of the chest. And four lightning bolts on the front shoulders. And four on the back.

A hoodie it is not.

Nor is it a golf shirt, at least in the traditional collar, non-skull, non-eight lightning bolt kind of way. Which stirred up a few folks again.

“I’m sure Francesco Laporta is a lovely man, but his shirts offend me greatly,” tweeted @jamiecweir.

“It really is a dreadful shirt,” tweeted @sam_golf, he of golf song parody fame.

“Why has Laporta been allowed on Wentworth Golf Course in a collar less  shirt. Standards must be falling,” tweeted @CarolTu66418269.

Most of the opinion, in a very non-scientific look at social media, was cut from this cloth (no pun intended again). But then there’s Laporta. He’s worn the shirt before. And a scroll through his Instagram account shows the man does not take these decisions lightly. He’s comfortable in his own skin. And shirts. At the BMW, he has shot rounds of 68, 65, 69, leads by a stroke heading into Sunday and sits on the brink of his biggest victory of his career.

Laporta’s shirt may have another fan, too.

“It’s interesting, obviously it creates a bit of a — what’s the word for it — I can’t think of the word now. People are split. They don’t know if they like it or not,” Hatton said last year of his hoodie.

“Anyway, I think it’s a cool thing that people are talking about it, should be open to the idea of creating a more open kind of sport rather than — don’t want it to be kind of snobby. I think you need to move on from that. It’s comfortable when you play golf in it and it looks good, then I don’t see an issue.”

Still, it all does make you wonder:

What will next year’s BMW leader be wearing?

10 winter-resistant plants that will add color to your yard