5 picks I love at the Wells Fargo Championship, according to a professional gambler 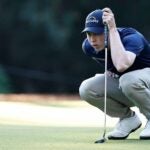 Chalk up another one for Erick Lindgren.

At the Mexico Open last week, GOLF.com’s expert prognosticator played the chalk (that’s gambler speak for betting the favorite) with a $400 wager on Jon Rahm to win at 4.5 to 1. Crunch the numbers, and that’s $1,800 in the bank. Not that Lindgren stuck to playing it safe. He also had Cameron Champ for $100 at 50-1, and Champ wound up playing in the final group with Rahm on Sunday. But for a mud-ball triple-bogey, Lindgren’s long-shot pick could have easily come out on top.

It’s all another way of saying that Lindgren has been hot, having correctly called three outright winners in the last five weeks.

Now it’s on to the Wells Fargo Championship, which many fans associate with Quail Hollow, in North Carolina. Not this year. With Quail Hollow hosting the Presidents Cup this fall, the Wells Fargo shifts to TPC Potomac in Maryland. Rory McIlroy is the defending champion and the odds-on favorite. Can his success carry over to a different venue?

Our terms remain the same. We give Lindgren a $1,000 gambling budget (just play money), and he supplies us with his top 5 picks, which we’ve outlined below.

With the forecast calling for cool temperatures and rain, Lindgren is calling for a grinder like Fitzpatrick, who has been playing terrific golf this year.

On the one hand, Simpson has not been sharp of late. But on the other, Lindgren says, he’s a grinder like Fitzpatrick. Given the long odds, Lindgren is taking a small risk on Simpson flashing some of his old form.

“Keegan hits the ball so straight, it’s hard not to be on him,” says Lindgren, who is banking on Bradley getting hot on the greens.

What’s true in comedy is true of golf. It all comes down to timing. Lindgren has been looking hard at Reavie, and says he sees a golfer rounding into form. “I’m expecting a big summer from him,” Lindgren says.