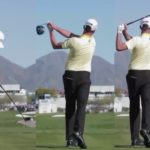 Webb Simpson's golf swing is devastatingly effective, but it's not a fan favorite.

When recreational golfers glance a cursory eye over a pro golfer’s swing, and decide whether they like the “look” of it or not, there’s probably nothing more important than the follow-through. Ask any teacher and they almost certainly will point somewhere besides the follow through as the most important position, even if there’s something magical about the look of it. To watch the movement of 100+ mph come to a graceful, confident, balanced finish is such an enduring image, and something golfers everywhere aspire to.

Which brings us to Webb Simpson.

Simpson has captured two wins, two top threes and an additional two top 10s in his last eight starts. But more impressive are his ball striking statistics, which have maintained elite status for the better part of 10 years. Since 2011, his average SG: Tee-to-Green ranking is 18th, which is all the more impressive when you consider his Driving Distance average over the same period is 108th.

Put simply: Webb Simpson is one of most accurate and consistent ball strikers of the modern era.

But like we saw on social media following Webb’s win at the RBC Heritage, his ball-striking prowess is not accompanied by praise of his golf swing. Unlike Rory’s flowing move, which fans can’t help but gush over, so many golfers can’t help but remark on how strange his golf swing is. Tron Carter over at No Laying Up captured the mood by comparing Webb to Philip Rivers, tweeting that he “gets it done, looks awful doing it.”

So why do fans consider Webb’s move such a strange one? It all goes back to his follow-through — and the thing that causes it.

The way your wrist moves obviously effects what the club is doing. The more the wrist cups/extends, the more the clubface opens. And the more it opens on the backswing, the more golfers need to close it during their swing in order to hit the ball straight. But that’s not always easy, which why a “cupped” wrist at the top of the backswing is often identified as a cause of a slice.

The current trend in golf instruction, as GOLF Top 100 Dana Dahlquist explains here, tends towards DJ’s flexed/bowed lead wrist position to prevent needing to match up that movement. But as you can see, Webb bucks this trend. He rolls the clubface open on his takeaway (look at how it compares to Brooks Koepka’s clubface on the takeaway below), and as you saw above, he uses his wrists to keep the clubface open at the top of the backswing.

But as we just mentioned, the more the clubface opens on the backswing, the more it needs to close before you hit the ball. And that’s why Webb Simpson’s unorthodox follow-through looks the way it does. Just as Arnold Palmer’s strange finish was the product of him trying desperately to hold the clubface open, Webb’s is his attempt to close the clubface a lot in a little amount of time. He rolls his wrists over aggressively, and he does it to absolute perfection — most of the time.

“Webb’s strong left hand grip which combined with a weaker right hand results in the lead wrist cupping at the top of the backswing,” GOLF Top 100 Teacher Terry Rowles says. “His body is less open than most at impact. He uses his arms aggressively to close the face, and his arm action is why he has one of the highest rates of closure on tour.”

Does this move, observed in full speed, look a bit weird? Apparently so.

But is it consistent, repeatable, effective and predictable? Undoubtedly yes. It doesn’t mean it will be for everyone, but it is for Webb.

And really, that’s all that matters. Webb Simpson is built just like a regular guy, and doesn’t swing it much faster than an average low-handicapper. Yet he’s putting together a Hall of Fame career, and GOLF Top 100 Teacher Jeff Smith, writing after Webb’s win in Scottsdale earlier this year, probably said it best:

“Sometimes a player’s abilities are just unique and there’s some real genius in that,” he wrote. “Understanding just how difficult it is to hit a golf ball the way he does with this swing makes me appreciate his genius even more.”