Why Jordan Spieth says he isn’t ‘back’ just quite yet, despite strong Masters finish 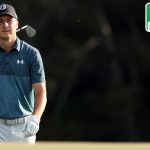 Despite a T3 finish at the Masters, Jordan Spieth says he isn't "back" just yet.

Why Jordan says he isn’t “back” yet

Jordan Spieth has been playing some fantastic golf over the past couple of months, but even as his results start to resemble those of his early years on the PGA Tour, he doesn’t think he’s reached peak form yet.

“A lot of it is the mechanics of my golf swing,” Spieth said at the Masters, speaking to what’s been holding him back from reaching that “next level” again. “I’ve just done a better job of cleaning up transition into the ball to where I’ve got it more on plane into the golf ball and shallowed and in a better position to not have to rely on timing as much.”

As GOLF.com’s own Luke Kerr-Dineen recently detailed, Spieth’s struggles over the last several years had to do with his swing getting too steep in his downswing. The result was a two-way miss as he tried to save shots at the last instant, which is no recipe for success.

Spieth’s T3 at the Masters was another step in ironing out that sequencing and getting his swing back on the correct plane, but as he’ll tell you, the process is far from over.

“I would say a little over halfway [there],” he said. “I feel on the right path, but there’s still a lot of work to go.”

Will Zalatoris has played just three majors in his young career, and he’s finished inside the top 10 twice. It’s quite the impressive start to his major-championship resume, and Zalatoris claimed at the Masters that he felt completely comfortable being in contention.

The secret to that calmness while in contention? Big-time putts on the Korn Ferry Tour and in Monday qualifiers.

Green jackets might not be on the line in development tour events or Monday qualifiers, but when you’re playing for your livelihood, the stakes can feel just as big.

If you struggle with putting inside 10 feet, try the ladder drill used by Masters champ Hideki Matsuyama. The drill is simple, and all you need is three ball and a few tees.

Measure out and mark tees at 3, 5 and 6 feet and place tees into the ground. Then, start rolling putts from the first marker. Don’t move back until you make three putts at each station. Go up and down the ladder, and start over when you miss a putt at any station.

If you can make it all the way through the ladder — down and back — you will greatly improve your putting inside 10 feet. If it works for a Masters champ, it can work for you!

Need help with your game? Schedule a fitting with the experts at our sister company, True Spec Golf.