Why so many experts love Joaquin Niemann’s golf swing 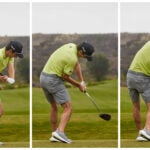 Joaquin Niemann notched his second-career PGA Tour win last week in rather impressive fashion. He didn’t just claim it at the legendary Riviera Country Club, amongst a notably strong field. He did it by finishing 19 under, just one shy of the tournament record.

It was one of those wins that avid golf fans, despite their various horses in the race, seemed universally happy about. It makes sense, after all. He’s a young, talented international golfer getting his dues, and a nice guy with a cool golf swing to boot.

Along those lines, why is it that so many golfers — spanning coaches, fellow Tour pros, fans and media people like me — seem to rave about Niemann’s golf swing? Without claiming to speak for everyone, let’s break down some of the big-picture reasons why.

Both simultaneously simple and complex, Niemann’s golf swing boasts that intangible quality of simply being fun to watch. It’s hard to know what, exactly, makes a golf swing easy on the eyes. If I had to guess, it’s some combination of even tempo, synced-up rotation, and general athleticism that smooths everything out. There are more concrete reasons why golfers like his swing, of course, but I wanted to start with the most obvious.

Growing up I was taught to keep pressure on the inside of my right foot on the backswing (the golf ball under the foot drill) but we know better now, as most great athletes have what’s known as inner ankle high patterns for premo movement. Niemann is a prime example. pic.twitter.com/hroKV3Cqkp

2. He makes a big backswing turn

Niemann isn’t the biggest guy on Tour, yet he’s been within the top 30 of clubhead speed each of the last two seasons (he finished 13th on Tour in driving distance last season). That kind of pound-for-pound strength never goes unnoticed in today’s distance-is-king era of golf, and as Brandel Chamblee notes, it starts with a big turn on the backswing. You can see his weight transfer to his back foot as his trail leg straightens for more hip turn. His shoulders, meanwhile, turn more than 90 degrees from where they started.

Niemann has a very interesting move through impact.

So much side bend to the right.

Is this “bad for his back”?

I don’t know. He’s been making thousands of swings a year like this for a long time. He’s likely very well adapted to it. pic.twitter.com/ssTIez0nvB

3. He has an elite sequence move

The phrase “golf swing sequencing” can basically be translated as: “Making sure different areas of your body move in the right order at the start of your downswing.” If you hit slices, it’s probably because of bad sequencing: You turn before you shift, which sends the club over-the-top. Matt Wolff’s swing can look the way it does because he sequences correctly.

If you’re looking for standard-great golf swing sequencing, Niemann is a good model. As you see in the picture above, at the start of his downswing Niemann has shifted his weight onto his toes, bent his knees (giving it a squatting look), and is shallowing the club. It’s pretty ideal, and if coaches like Niemann’s swing, this is one of the biggest reasons why.

When you hear people talk about 'rotating in posture' this is what they mean. pic.twitter.com/n97RdsIGm8

Niemann has a strong grip, and strong grips usually require lots of rotation on the downswing, or else you’ll hit hooks.

Luckily, that’s exactly what the Riviera winner does. Except Niemann doesn’t just rotate. Through a combination of strength and flexibility, particularly in his core muscles, he rotates while staying in his posture. His pelvis stays back, and his head stays in roughly the same spot where it started. There’s not a whiff of any dreaded “early extension,” where your pelvis moves towards the ball on the downswing.

By rotating in his posture, Niemann turns the club around his body, and matches up his grip by preventing the clubface from flipping over. The result? Long and straight, with a victory at Rivera to prove it.