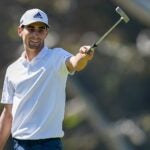 Joaquin Niemann watches a putt during the final round of the Genesis Invitational on Sunday at Riviera Country Club.

Joaquin Niemann set records all week long at Riviera. They weren’t for naught.

The 23-year-old Chilean breezed to his second career PGA Tour title by winning the Genesis Invitational on Sunday at Riviera, closing with an even-par 71 to beat Collin Morikawa and Cameron Young by two.

Niemann, who finished 19 under for the week, entered Sunday with a three-shot lead over Young, a rookie, and a six-shot edge over Viktor Hovland. Niemann smashed records Thursday through Saturday en route to his sizable lead.

His opening-round 63 tied the lowest first-round score in Genesis Invitational history, and he set both 36-hole (126, 16 under) and 54-hole (194, 19 under) scoring records. Now he’s the event’s first wire-to-wire winner since Charlie Sifford in 1969.

It’s the second career PGA Tour victory for Niemann, who previously won A Military Tribute at The Greenbrier in 2019.

“I felt I had to be really focused during the round. All I wanted to think about was the next shot and trying to feel my body, how I was feeling, trying to feel the shot I was trying to do,” Niemann said. “Yeah, when I finished it was like, Hell, yeah, it took forever, we’re finally done and I can have a smile on my face and just think about it like it was a fun day.”

Niemann still led Young by three at the turn on Sunday, as both players shot even par on the front. Young bogeyed 10 and Niemann one-upped Young’s birdie on 11 by chipping in for eagle. That pushed him to 21 under and gave him a five-stroke lead with seven to play.

Stalwarts like Justin Thomas, Hovland and Morikawa, who would have vaulted to world No. 1 with a win, were chasing the lead all day, but it was too big of a deficit, and Niemann wasn’t budging. He was 7 for 7 scrambling through 13 holes, but he failed to get up and down to save par on 14 and 15. Then Young added an unlikely birdie on 15. He had an awkward stance from a fairway bunker and had to lay up short of the green, but he holed that from 53 yards. Just like that the lead was two with three to play.

Young went bogey-birdie on 16 and 17, and Morikawa, in the group ahead, birdied two to the last three to set the clubhouse lead at 17 under. Leading Morikawa and Young by two on the 18th, Niemann found the fairway, found the green and two-putted to victory.