What do Tour pros *really* think about in nervy moments? Here’s one player’s honest take 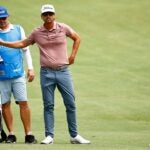 Roger Sloan at the 2021 Wyndham Championship, where he finished runner-up.

There’s never been a more lucrative time to be a card-carrying PGA Tour professional. Take this week’s Houston Open, where the winner will grab a cool $1.35 million from a total purse of $7.5 million, and every player who finishes in the top 20 will bank at least six figures. And that’s nothing compared to what the Tour’s bigger events pay out. Next year’s Players Championship winner will reportedly collect $3.6 million (from an overall prize pool of at least $20 million), up from $2.7 million in ’21. All in, in the 2021-22 season, players will contend for roughly $633 million. That’s an 18 percent bump over last season.

The figures are eye-popping and, for many players, potentially life-changing.

Ask Roger Sloan, a 34-year-old Canadian who dutifully worked his way to the riches of the PGA Tour in 2015 after stints on the Canadian and Korn Ferry tours. For a journeyman like Sloan, arriving on the PGA Tour is a big deal, partly because it’s the pinnacle of the pro game and partly because of what a big week or two can mean for a player’s bank account. Sloan has yet to win in four full seasons on Tour, but he did come close last season when he lost to Kevin Kisner in a six-hole playoff at the Wyndham Championship. That runner-up finish came a week after Sloan finished 6th at the Barracuda Championship.

Was his improved play on account of better ball-striking, as his yearlong stats indicated, Sloan was asked Wednesday at the Houston Open. Sloan said it was not. He instead attributed his better form to “a little bit more work from the mental side of things. Just kind of getting out of my own way.”

That can mean many things coming from a Tour pro, but in Sloan’s case, he said, when the pressure cranked up on Sunday afternoons, he’d start thinking less about club selection and course strategy and more about dollars and cents.

“Sometimes I get caught up in the magnitude of the situation,” he said. “I can go down the storylines of what that shot represents or what a good finish that week represents … how much money you could make or how many FedEx Cup points I could make and what that’s going to do for [me] — maybe that will get me into the invitational tournaments.

“Meanwhile, I’m just sitting in the middle of the 16th fairway with a 6-iron in my hand and I’ve gone down this pipeline of all these thoughts and it just builds the shot up too much to where it’s not a 6-iron anymore — now it’s the most crucial shot I’ve ever hit in my career.”

The fix? Simple. Or at least Sloan made it sound simple.

“Just being able to separate myself from the storylines and just really turning a 6-iron into a 6-iron.”

Sloan has played five events in the new season, missing the cut three times. His best finish came at the Sanderson Farms, in October, where he tied for 14th. He’s a Houston resident, meaning this week’s start at Memorial Park is a home game that comes with different kinds of perks.

“Professional golf is life on the road,” Sloan said. “I think it’s really underrated sleeping in your own bed.”