When you can’t stop topping the ball, take a moment and do this 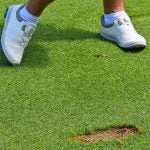 Find a spot on the ground, and practice hitting it consistently.

Golf, in many ways, is a game of opposites. We hit the ball — and then the ground — to make it go up in the air.  Unfortunately, most golfers do not grasp this concept.

The idea of hitting down to get the ball to go up is a counterintuitive one, and goes against golfers’ instincts, which leads to them getting the club to work under the ball to lift it up into the air by scooping it. The problem is that it doesn’t work. That action leads to hitting the middle or top of the ball with the leading edge or bottom edge of the golf club, so they end up topping their golf shots.

In 1980, I went to the IVB Golf Classic and followed Ben Crenshaw.  I noticed that he would hit the ball then the grass would fly from his club down the fairway.  I started to stare at the ball before he made his swing and realized that he was hitting the ground after making contact with the ball. Simple as it sounds, the lightbulb in my head went off. For me, it was a defining moment in my golf game.

Practicing hitting a spot on the ground

I went back to my club, later that day, and found a spot on the ground and made practice swings until I hit the ground with consistency. I did not hit a ball for 15 minutes. I paid attention to where my club was hitting the ground and then I put the ball down in a spot just before I made contact with the ground. I will never forget that shot and how it felt: Like one of the most pure golf shot I ever hit in my life.

So that’s my advice to you if you can’t stop topping the golf ball the next time you’re on the course or the range. Take an iron, find a spot on the ground, and make practice swings focusing on hitting that exact spot on the ground, every time. Start slow and build speed over time. All it takes is a few swings — 5 or 10 — but if you can get to the point where you’re consistently hitting the same spot on the ground every time, your next golf shot won’t be a topped one.