This major winner’s biggest tip for hitting out of the rough? Look down. 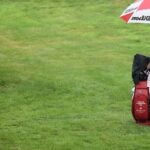 Padraig Harrington hits a shot from the rough earlier this year during the BMW PGA Championship.

Keep your head down.

It’s likely going to be there anyway, when you’ve hit into the rough. And golf’s most-used tip — and maybe most-abused! — may help you get out.

“All rough is not the same,” the three-time major winner said on the video. “It really depends on how the ball — not how deep it is into it, but what way the grass is lying and how much moisture is in the grass. There’s a number of factors that come into it.”

Let’s listen to Harrington on how to handle each.

If the ball sits straight down in the grass

If the ball sits in grass running toward the target

If the ball sits in grass running away from the target

If the ball sits in grass running toward you

If the ball sits in grass running away from you

“If I change the grass and push it away from me, when I swing into that grass, the grass is going to stand up this way. I’m really in danger of hitting a hook here,” Harrington said. “This is the one that whips around your hosel and you hit it across your left toe and left. The grass is flowing that way, it’s going to stand up and pull the ball left. That’s the danger one. That’s where you have to take extra loft, don’t go for much. If the grass is going away from you, if it’s dark green, if your ball is sitting in it, and you’re off the fairway, take more loft — hit a 9-iron or 8-iron; don’t go for broke with the heavy green lie that’s standing straight up.”

“The greener the grass, obviously the more moisture in it, the heavier the ball is coming out, the harder you got to hit it,” Harrington said.

If the ball sits in grass under a tree

“If you’re close to the fairway and sprinklers, usually the grass is quite thick and lush, it will be dark green and the roots are strong, and that’s the one that you have to hit really hard.”

A word on technique

“You always try and hit the ball as clean and tight to the golf ball as you can in the rough whether it’s a long shot or a chip shot.”