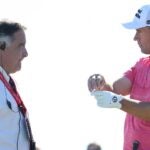 Padraig Harrington and a rules official on Friday on the 2nd hole at Dom Pedro Victoria Golf Course.

Padraig Harrington, with a large lady bug head cover in his bag, knows well the idiosyncrasies of flying insects.

“Butterflies do that all the time,” he told his caddie. “They try to change direction.”

Seconds earlier, on the 2nd hole at Dom Pedro Victoria Golf Course, a moth had — from the left edge of the cup at the moment Harrington’s par putt fell in the middle during Friday’s second round of the European Tour’s Portugal Masters. And because it did, a lengthy rules conversation ensued — and nearly forced the European Ryder Cup captain to rehit his putt.

“Well, I have to say, I’ve never come across anything like that,” the announcer on the Golf Channel broadcast said.

The sequence began when Harrington hit his 5-foot putt. As he did, a white moth flew in, perched itself on the lip — and appeared to fly away as the ball rolled past it. The concern was whether they touched — which would have forced Harrington to putt again due to Rule 11.1b Exception 2.

“The ball was going into the lip — you know what, this could be a second apart, but it looked really close,” Harrington told an official as they stood just off the green. “The butterfly kind of went away from the ball, but I don’t think they made contact.”

“The ball went in, but it was definitely the reason the moth took off again was because the ball hit the moth,” an announcer said on the Golf Channel broadcast.

“But did it?” another announcer said. “To me really, it looked like the moth took off just before it got there.”

If moth and ball touched, the rule states: “When ball played from putting green accidentally hits any person, animal or movable obstruction (Including another ball in motion) on putting green: The stroke does not count and the original ball or another ball must be replaced on its original spot.” In most cases, the rule comes into play before the putt reaches the hole — and not when — and helps when a ball is bumped off line. But in this case, Harrington would have to sink another 5-footer.

Harrington moved to the next hole, where Golf Channel announcers reported that the Portugal Masters tournament director said that Harrington was “all clear.” To note, the rules also clarify how to enforce Rule 11.1b Exception 2, when it says: “Exception 2 to Rule 11.1b is to be applied using the “known or virtually certain” standard. Therefore, if there is knowledge or conclusive evidence that the ball played from the putting green accidentally hit a person, animal or movable obstruction on the putting green, the stroke does not count.” In Harrington’s case, he said his ball did not touch the moth.

Harrington finished with a one-over 72 and is nine strokes off the lead.