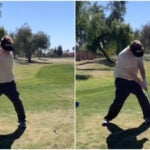 The ball doesn't care what your swing looks like.

The most common problem in golf has been the same for generations. It’s been so hard to shake that some teachers think, because of the way the human body is designed, humans can’t help but fall into this trap.

That flaw is of course, coming over the top. Which, when paired with an open clubface, leads to some wicked banana slices. But through some combination of innovation and desperation, this golfer figured out a solution to that problem.

As @ryespence shared on TikTok, this golfer learned how to avoid a slice — by playing golf backwards.

You can see his golf swing (and me breaking it down) below.

As I say in the video above, it’s actually quite a clever idea.

Many aging golfers who lack flexibility will drop their trail foot back slightly to help them swing more in-to-out, and that’s exactly what this golfer is doing, just to an extreme degree.

The easiest way to think about this is that the golfer here isn’t swinging backwards, he’s aiming his feet incredibly far out to the right of his target. His club, meanwhile, is pointing relatively straight, so he’s effectively setting up to hit a huge draw.

His back being to the target means he’s effectively turned his body so far away from the target, that no matter how much he comes over the top, he’ll still deliver the club from the inside, relative to his target line.

I’d suggest extreme caution trying this at home, but fully endorse the message at the heart of this wonderfully, unusual golf swing: the golf ball doesn’t care what your golf swing looks like. Pay attention to the ball flight, and you cant go too far wrong — however you end up swinging.