This superhero-inspired swing thought had me hitting it straighter immediately 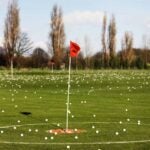 Here's a swing thought to help get your game dialed in this spring.

If you are anything like me, living in a place where the golf season isn’t 12 months out of the year, you are probably used to shaking off that winter rust every spring.

That’s what I’ve been doing the past several weeks. Luckily, I didn’t seem to be in that bad of a place when I visited my local GOLFTEC for the first time earlier this month. I worked with Nick Pelle last year and saw a ton of improvement, but I’m back again this year to try and keep that success going.

While hitting balls with Nick for the first time this year, I kept most of my good habits acquired from the year before intact, but still needed to work on not getting too steep and improving my path. He threw a hula hoop on the ground to help with the latter — tracing it with my hands during my swing — but I was still hitting too many pulls.

The path was better, but the face angle at impact was not.

“Are you familiar with a superhero named Spider-Man?” Nick said.

“Yes,” I answered, having no idea where this was going.

“Spider-Man the target,” he said, repeating the swing thought for emphasis.

After a couple of practice swings, my first contact with the ball with my new swing thought was significantly better.

“There you go,” Nick said, watching the swing back on the screen. “We held the face open longer on that one and allowed the ball to start out to the right. Good swing.”

“Spider-Man the target,” he repeated again, as I stood over the ball. Whack.

“Love it,” Nick said. “That’s your best one right there. Little draw.”

The progress has continued. I’ve had a couple of sessions and my own range time since, and I’ve stuck with that swing thought the whole time. The result? Pretty solid ball-striking for this time of the year. So far it’s a mix of tight draws, straighter shots and, at worst, a little fade that’s still better than a big pull. (If you start to fade it or push it too much, you are over-doing the Spider-Man swing thought.)

Will this translate to the course? Time will tell. But hey, it’s April, and we take little victories wherever we can find them.