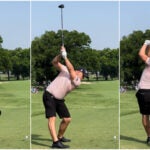 "I do what feels natural. If it feels right, do it," he says. "If something feels uncomfortable, you will never trust it."

TULSA, Okla. — Daniel von Tonder cuts an imposing figure on a golf course. He’s just shy of six feet but burley and thick. He was a boxer before he was a golfer, and approaching the 656-yard fifth hole during his final practice round before the 2022 PGA Championship, he needed to throw a punch.

So, he reared back and sent the club through with a loud grunt. Members of the crowd glanced at each other, puzzled and distracted. The ball didn’t notice. It was sailing high into the sky by this point. A powerful draw rounding the corner of Southern Hills’ longest hole.

“I did a boxing when I was young, that’s why I give it a little noise,” he explained afterward. “The louder the sound, the further the ball goes.”

It’s one of the many uniquenesses of Daniel von Tonder’s approach to golf, which you won’t find in any golf textbook. Yet his one-of-a-kind style is no novelty. It also works.

‘My swing is very different’

von Tonder came to the game late, at 14 years old, but he fell for it in a flash. By 16, he decided to quit school to pursue professional golf. A few years later he was the No. 1-ranked amateur in South Africa, and by 2014, he’d collected his first professional win — the first of nine on South Africa’s Sunshine Tour.

What’s unique about von Tonder is that he’s done it entirely on his own. He’s never had a swing coach, and his golf swing shows it. He stretches his arms straight and outside on the takeaway, makes a big turn with very little wrist hinge, and finishes Arnold Palmer-style, with arms stretched out overhead.

von Tonder knows his swing is different, and he likes it.

“I’m self-taught, I have my own way of doing things,” he says.

When people ask him about his move, and his advice for his fellow self-taught golfers out there, he preaches a simple philosophy:

“Really, it’s the basics,” he says. “I feel like I take the club straight back, you go up to target [on the backswing], and you swing through. You can’t go wrong with that.”

von Tonder adds a few details to this: First, he says golfers should pick a shot shape that feels natural to them — for him, it’s a right-to-left draw — and work on perfecting it. You never want the ball curving too much, or in the wrong direction. He also says golfers should grow up swinging hard. That’s where his own grunt came from.

“Start young and it will teach you to swing harder and get stronger,” he says. “That’s good for longevity, because it will reduce the strain on your body later on.”

And once you do those things, von Tonder says, never forget the golden rule: Do what feels natural to you, and don’t worry about the rest.

“I do what feels natural. If it feels right, do it,” he says. “If something feels uncomfortable, you will never trust it.”