Swing Stories: A wicked slice wrecked this 7-handicap’s game. This fix saved him 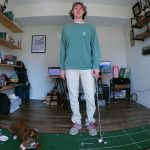 Brendan Hegarty's game was lost. Here's how he rediscovered it.

Welcome to Swing Stories, a new series sponsored by GOLFTEC in which we’re highlighting how regular golfers like you have benefited in considerable ways from getting the right swing advice and/or properly fit clubs. Now on the tee: Brendan Hegarty, 25, of Stamford, Conn.

Previous installments: How this teen added 35 yards with her driver | The 100-shooter who became an 80s-shooter

Standing on the tee, 25-year-old lefty Brendan Hegarty aimed way right. The next time, he aimed even further right.

Then to the right of that.

But no matter how far right Hegarty — who in high school was a steady 7-handicap — lined up, he couldn’t neutralize that slice. His ball would fly left of left, into rough, trees, water, you name it. Hegarty lost about five balls a round, which was maddening.

“And expensive,” he quickly added.

It couldn’t be his swing, Hegarty thought. Must be the clubs.

So last summer, Hegarty went to see Boris Busljeta, a GOLFTEC instructor in Westport, Conn., for a fitting. After one look at Hegarty’s swing on video, it was clear to Busljeta that new clubs were not the solution.

“His swing direction was 10 degrees out-to-in — on his best shots,” Busljeta says.

A swing path moving that far from out-to-in or over-the-top is a formula for blocks out to the right, with the occasional hook in-between.

Sure, draw-biased clubs would help, but Hegarty needed a complete swing makeover.

Want to see how you compare? Fill out this form to book a swing evaluation and a local GOLFTEC coach will contact you to discuss your game.
Book Now

Hegarty, 25, grew up on Long Island. Then he went to college in upstate New York, where he didn’t play once. Ditto after he moved to New York City.

“I got caught up in life and other things,” he said.

Then, thanks to a push from his girlfriend, Courtney, he decided it was time to dust off his clubs. That’s when Hegarty encountered the kind of scorecard-wrecking slices that would give any golfer cold sweats.

“When I tried to put my swing back together,” he said, “I had all these thoughts of what I used to do and none of it worked.”

The first thing Busljeta usually does with a new pupil is “to dig into their pain.” With Hegarty, it was simple: I used to be a good golfer. Now I stink and I don’t know what to do about it.

How they fixed it

“He would take the club a little too far outside, opening up the clubface,” Busljeta said. “Once we got him a little more depth at the top of his swing, it made it a little easier for us to get him to swing down on plane.”

Improvement didn’t happen overnight, but it did happen.

“From where his clubface was to where it is now,” Busljeta went on, “it’s incredible. The clubface was almost pointing to the sky when the club was halfway back.”

Hegarty was also catching many of his iron shots heavy, because his swing was so steep. Busljeta worked with Hegarty on getting him to keep the shaft further behind him through the downswing — i.e., more of round motion than straight up and down. Shallowing out Hegarty’s swing, Busljeta said, resulted in “divots that were smaller and more predictably in front of the ball as a result of having the grip of the club more forward at impact.”

Next, in search of more yards, Busljeta went to work on Hegarty’s footwork.

“His left leg would literally be like Elvis,” he said. “It would kick out so far. It wouldn’t be able to rotate whatsoever.” Busljeta got Hegarty to keep his hips moving more toward the target to help him create the necessary rotation.

Hegarty’s drives, which had been maxing at out 230 yards, now run out to about 260. On a recent golf trip down South, he posted several rounds in the low 80s, and just last week near his home in Stamford, Conn., he shot four over for nine holes. In other words, he’s looking and playing much more like the single-digit handicap he once was.

Busljeta added that perhaps the best thing Brendan had going for him during his swing rehab was his attitude.

“He was so positive,” the instructor said. “If half my students were like him, put it this way, I would be writing tons of articles. He makes me look like an all-star. He listens and if he doesn’t understand something, he asks questions.”

“He had an easy way of explaining the feeling of the motion [of the swing],” Hegarty said. “Once I could feel it, I could more easily reproduce it.”

Hegarty is approaching tee shots differently, on par 3s in particular. He no longer aims way right to protect against the inevitable slice.

There is no inevitable slice.

He used to think, Just let me get somewhere near the green so I can chip it close enough to make par.

“Now I’m confident that I’m going to hit a green,” he said.